We believe that this is a deliberate effort to harm Guo Feixiong and kill him slowly.

Chinese democracy activist Guo Feixiong (郭飞雄, also known by his original name, Yang Maodong 杨茂东) has now been held in Guangzhou’s Tianhe Detention Center for 743 days since his detention on August 8, 2013, without once being let out for fresh air. Having protested multiple times without result, Guo’s lawyers now report that during their most recent meeting Guo’s memory, speech, and thinking all showed signs of damage.

These actions by the Chinese authorities have already led to widespread anger and concern among Chinese human rights activists. We believe that this is a deliberate effort to harm Guo Feixiong and kill him slowly. We ask that international organizations and foreign governments pay close attention to Guo Feixiong’s situation and carry out effective interventions to halt these heinous acts by the Chinese authorities.

After Guo Feixiong was secretly detained in Guangzhou on August 8, 2013, police waited many days before finally confirming his whereabouts. On June 19, 2014, the authorities charged Guo with two counts of “gathering a crowd to disrupt order in a public space.” First, they allege that Guo Feixiong gave speeches outside the offices of Southern Weekly in January 2013 and later published several commentaries on what’s known as the Southern Weekly New Year’s Editorial incident on overseas media sites. Second, they allege that Guo and friends appeared in the streets holding signs demanding that officials disclose their assets and that the National People’s Congress ratify the International Covenant on Civil and Political Rights, and, further, that they took photographs that were uploaded to the Internet.

As the hearing in Guo Feixiong’s trial was adjourned on November 28, 2014, the presiding judge announced that the verdict would be announced at a later date. But Guo remains in custody to this day while he continues to await the verdict’s announcement.

According to his lawyer, Guo Feixiong is being held in a cell with 30 other detainees, leaving each person only one square meter of space. Still awaiting a verdict, Guo has now been illegally detained for more than two years under these conditions and has never been allowed yard time. 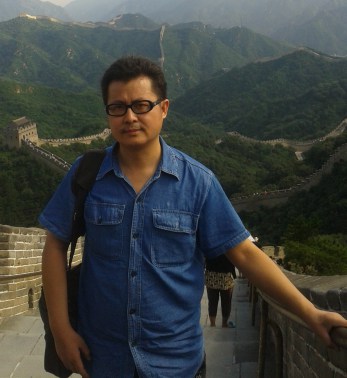 The authorities have committed numerous violations in the course of handling Guo Feixiong’s case. Article 25 of the State Council’s Detention Center Regulations clearly states that detainees “should be given one to two hours of outside activity time each day.” And Article 27 of the Ministry of Public Security’s Measures for Implementing the Detention Center Regulations states that “detention cells should provide each person living therein with a minimum of two square meters.”

The abuse of Guo Feixiong has been continuous and deliberate. In a formal complaint filed this past June, Guo wrote: “Bailiffs from the Tianhe District People’s Court in Guangzhou escorted me between the Tianhe District Detention Center and the court to attend a pre-trial hearing on August 1 and trial hearings on September 12 and November 28, 2014. On those three occasions, the bailiffs abused me by covering my head with a black hood, handcuffing my wrists behind my back, and placing my feet in shackles. They intentionally over-tightened the handcuffs and shackles to put pressure on the blood vessels and nerves in my hands and feet, causing evident swelling and abrasions. In particular, they tightened the shackles such that it caused partial paralysis in my left ankle that has not yet fully recovered. On the way to trial, I was hooded, cuffed, and shackled, with the authorities intentionally tightening the metal cuffs and shackles so that the metal bands dug into the flesh on my hands and feet.”

China is a member of the United Nations Human Rights Council and ratified the Convention Against Torture and Other Cruel, Inhuman or Degrading Treatment or Punishment on November 3, 1988. However, the Chinese government has shown complete disregard for its international commitments, trying to fool the international community while it willfully violates its obligations.

As far as Guo Feixiong’s so-called criminality is concerned, his behavior does not constitute any criminal offense under China’s Criminal Law. In his defense arguments to the court, Guo Feixiong’s lawyer Li Jinxing (李金星) said: “Set aside for a moment the phony and contradictory nature of the witness statements put forward by the prosecution. Even if the all of the evidence presented to the court by the prosecution were genuine and true, Yang Maodong and [co-defendant] Sun Desheng would still be guilty of no criminal offense whatsoever.”

On the contrary, the Chinese authorities’ violations do not stop with the detention center regulations mentioned above. According to China’s Criminal Procedure Law and international legal standards, the authorities committed criminal acts in their enforced disappearance of Guo Feixiong (detaining him on August 8, 2013, but not notifying his family of the detention until August 17), torture, delayed verdict, and illegal detention.

There have been other serious violations of procedural law connected to the prosecution of Guo Feixiong, according to an account by his lawyers. The authorities deprived Guo of his right to meet with defense counsel during the investigation phase. At trial, numerous defense witnesses were forcibly taken away and therefore prevented from appearing in court. Lawyers were not permitted to copy audiovisual materials submitted as evidence. During the trial, the defendant and his lawyers were deprived of their right to speak.

Guo Feixiong was born in Gucheng County, Hubei (湖北谷城), in 1966. In 1988, he graduated from Shanghai’s East China Normal University and went on to become a successful bookseller. In 2005, he became a consultant for the Beijing Zhisheng Law Firm (北京智晟律师事务所) and began taking part in rights defense activity in Guangdong Province, where he played a key role in the widely covered Taishi Village Recall Case. Since April 2005, he has been placed under criminal detention four times for “gathering a crowd to disrupt order in a public place.” The third time, he was eventually convicted of “illegal business activity” and sentenced to five years in prison. This is now Guo Feixiong’s fourth arrest.

In an appeal sent to then-UN Special Rapporteur on Torture, Manfred Nowak, on June 4, 2007, Guo Feixiong’s wife Zhang Qing (张青) described the torture her husband received after he was arrested in September 2006: “Police from the Guangzhou Public Security Bureau’s Pretrial Investigation Unit shackled Guo Feixiong’s hands and feet to a bed for many weeks. Interrogators deprived him of sleep for several days in order to force him to confess out of exhaustion. In protest, he carried out a 25-day hunger strike. When Guo Feixiong was transferred to a detention center in Shenyang, interrogators handcuffed his wrists behind his back, suspended him, and had him sit on a ‘tiger bench.’ They also hit him in the genitals with electric prods.”

The Chinese authorities’ indefinite detention of Guo Feixiong and their torture and inhumane treatment toward him causes us to fear that Guo’s health and perhaps even his life may be in danger. The tragedy of human rights defender Cao Shunli, who died in custody of mistreatment and deprivation of medical care, demands that we remain alert and take steps to prevent another tragedy. We also have the responsibility to confront China on its abuses, and urge it to adhere to its laws and its international commitments.

When Gao Zhisheng (高智晟) was detained in August 2006, Guo Feixiong issued a plea to the world: “I call on those inside and outside China to devote themselves with unyielding determination to the campaign to rescue Gao Zhisheng. We are not just trying to rescue an individual, but rather the spirit of the Chinese people and Chinese nation. We are giving aid to the entire campaign for democracy and rights in China. This campaign is not just about individuals, but rather has an overall significance.”

Today, we once again appeal to the world: Save Guo Feixiong and free him!

Researched and written by Guozhen Xiao, translated by China Change.

This entry was posted in Headlines, Press Freedom, Writers in Prison and tagged Guo Feixiong. Bookmark the permalink.