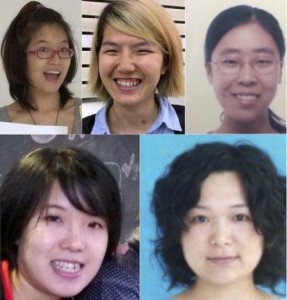 Five women who all worked as activists for various feminist causes and had organised public events to raise awareness of a host of issues, from eradicating domestic violence to the need for more women’s toilets in China.

Few predicted the women would ever become targets of the authorities, since their causes seemed relatively unobjectionable.

That is, until last March, when the women were planning a multi-city protest to call for an end to sexual harassment on public transport.
The size of their networks and their determination to speak out in public appeared to unnerve the authorities. One by one, they were detained by police.

The protests the women had planned were supposed to be peaceful; the treatment they endured in Chinese detention centres was not.

For more than a month, the women were subject to continual interrogations by police.

All were forced to sleep on floors, and some were denied vital medication.

One woman, Wu Rongrong, was repeatedly told by police that “we’ll tie you up, throw you in a cell with men, and let them gang rape you”.
They also threatened the future of Wu’s four-year-old son.

Another woman, Li Tingting, was interrogated 49 times in 27 days.

A global campaign to push for their release ensued, and there was an outpouring of relief on Twitter when the #FreetheFive group were released.

Months later, the women remain under police surveillance. The group are pushing for their case to be withdrawn. Li Tingting told the BBC she believes the police want a swift conclusion too.

“They probably want to retract the case now, because there’s nothing to investigate,” she explains. “They are also afraid of us demanding compensation. They need to close this case and return my passport to me.”

Where does the wider women’s movement stand after the Feminist Five detentions?

In some ways, this is a very dark time for anyone who wants to shape Chinese government policy, to change the way things work from outside of the Communist Party’s machinations.

“In the next few years, I don’t think it’s looking good,” Li Tingting says. “The space for us to do things has narrowed greatly in the past few years.”

Chinese civil society has suffered under the rule of Chinese President Xi Jinping. Thousands of activists, dissidents and defence lawyers have been targeted by the authorities.

Many non-governmental organisations have been forced to shut their doors, or dramatically scale back their activities.

“My male friends, they have ‘man clubs’ where they share their connections, work opportunities and experiences, and support each other,” she reasons. “Why not have a professional women’s circle for corporate women to share their experiences?”

Yolanda appears to feel little connection with the Feminist Five, or the issues they raise.

“Personally, I think I have the right to do whatever I want,” she says.
“I feel like for me and the women around me, the professional women and women in the corporate world, I never feel like I have difficulties or there are things I cannot do, or that I am limited. I have a lot of hope and confidence that women can stand up for themselves in China.”

Still, Yolanda has felt the need to make a stand on some matters. In 2014, she participated in the “Leftover Monologues”, a stage play examining the pressures felt by unmarried women in their late 20s.
“If you’re single, you shouldn’t be ashamed,” she explains.
The detentions and subsequent release of the Feminist Five have also resulted in positive changes for the women’s movement in China.

According to Beijing based writer and commentator Zhang Lijia, the movement has become more cohesive since the Spring.

“Before there were different pockets of women activists. For example, those working on LGBT issues, or promoting gender equality.

There were some connections among the associations, of course, but that hadn’t worked together. Now they have a common enemy in some sense,” she explains.

“One thing I know for certain is that those detentions may have deterred some people, but more likely that most people just become more careful and more aware of the dangers they are facing,” Ms Zhang continues.

Some women participated in small scale protests during the Feminist Five’s detentions, but they took precautions. They wore masks resembling the detained women’s faces to hide their own identities.

The Feminist Five have received a major boost in their profiles. Many follow the women’s online blogs. Some of the women continue various campaigns to influence government policy.

On 19 November, for example, Li Tingting joined activists from ten other cities to demand more women’s toilets in China.

Ms Li appears to be cautiously optimistic for the future.

“Before [the detentions], many outside China didn’t know we had women’s rights activists in China. It’s a good thing in some ways,” she says.

“But we need spontaneous participation from women and a push for more women to wake up,” she says. “Only when calls for change come from women can they be heard in our society.”
For detail please visit here

This entry was posted in Headlines and tagged China, Feminist, Women. Bookmark the permalink.