As the 2015 Nobel Peace Prize is awarded to Tunisia’s National Dialogue Quartet, Reporters Without Borders notes that the 2010 recipient, the cyber-dissident Liu Xiaobo, has been languishing in a Chinese prison for nearly seven years. The organization urges the international community to put pressure on Beijing to release the citizen journalist.

The Chinese government has been arbitrarily holding Liu Xiaobo, who was also awarded the 2004 RSF Prize, in Jinzhou Prison in Dalian, Liaoning Province, east of Beijing, since 2008. His wife, Liu Xia, has been under house arrest since October 2010 and faces constant pressure from Chinese authorities despite never having been convicted by any court.

“The basic freedoms of Liu Xiaobo and his wife Liu Xia have been flouted for nearly seven years,” said Benjamin Ismaïl, head of the Reporters Without Borders Asia-Pacific desk. “We call on the Tunisian Quartet, winners of the 2015 Nobel Peace Prize, to use their exposure in the media to lobby the Beijing authorities over the detention of Liu, the only Nobel Prize winner currently behind bars.”

“We also urge the international community to snap out of its lethargy. The empty 2010 winner’s chair symbolizes the failure of Western democracies to act on human rights and freedom of information.”

On 18 September, 44 journalists and writers sent an open letter to Chinese President Xi Jinping demanding the immediate and unconditional release of Liu and his wife, and of the journalist Gao Yu and the Uighur blogger Ilham Tohti. On 2 September, 12 Nobel Peace laureates wrote to President Barack Obama, himself the recipient of the prize in 2009, urging him to demand the couple’s release.

In contrast to the vigorous action taken by campaigners, the silence of China’s partner countries is deafening. When President Xi visited the United States last month, Obama did not refer in public to Liu’s plight. Nor did French President François Hollande and Prime Minister Manuel Valls take the opportunity during visits to France by their Chinese counterparts in 2014 and 2015 respectively to raise the subject, which remains one of the Chinese Communist Party’s most taboo subjects.

In 2011, a number of civil society representatives condemned the “deafening silence of Western leaders.”

Liu, a writer and intellectual who co-founded Charter 08 — a daring public call for fundamental political reforms, democracy and human rights in China – was arrested in December 2008 and is currently serving an 11-year sentence for “inciting subversion”. 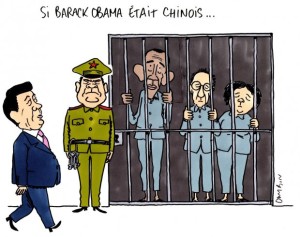 He is among 108 journalists and netizens still held in China, making it the world’s biggest prison for those working in news and information. It is ranked 176th of 180 countries in the 2015 World Press Freedom Index compiled by Reporters Without Borders.