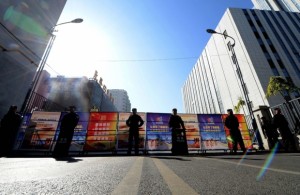 Here is what a court in Urumqi, the capital of China’s western Xinjiang region, concludes Ilham Tohti, a balding, thick-set, 44-year-old professor, did: “Using ‘Uighur Online’ as a platform, and taking advantage of his role as a university professor,” Ilham “spread separatist notions” and “bewitched and coerced” seven of his students to join into an eight-person, web-powered splittist clique with international reach. Here is what Tohti, by all appearances, actually did: he created and maintained a Chinese-language website, called Uighur Online, that provided a bridge between China’s Han majority and its Uighur minority, a Turkic-speaking, predominantly Muslim group that mostly lives in Xinjiang and has an uneasy history of coexistence with the growing number of Han who live among them, marred by violent clashes. Like all Chinese-language websites, it could be read by anyone around the world with an Internet connection and Chinese-language proficiency. It acted as a kind of information hub with investigative reports, opinion pieces, and content aggregated from overseas. Elliot Sperling, a professor of Central Eurasian studies at Indiana University-Bloomington who describes himself as a friend of Tohti’s, depicts the now-defunct site—shut down in June 2008, subsequently moved to U.S. servers, now unavailable once again—as “a path for the other side to think about what was going on.” Uighur Online, Sperling told me, “was providing the raw material for dialogue, unmediated on the Internet. He was trying to inform people” so they knew “what Uighurs feel.”

Tohti was convicted on September 23 of the (vaguely defined) crime of “separatism,” for which he was sentenced to life in prison and stripped of all his assets. That language obscures the grisly nature of the outcome—Tohti is likely to suffer decades of indignities both large and small and possible torture, while his wife, Guzelnur, currently deprived of the family savings, will effectively be a single mother of two and may have to rely on the kindness of friends and strangers. The verdict came from an intermediate court in the Xinjiang capital of Urumqi, although it’s certain that central authorities in Beijing made the final call. The case presented against Tohti, made available in a September 24 Chinese-language précis via state agency Xinhua, rested on a sorry mash-up of stray quotes, innuendo, and conclusory reasoning—what frankly looks more like first-draft opposition research for an upcoming Senate campaign than the foundation of a life-ruining legal verdict.

Even with years to prepare, the immense resources of the Chinese police, judicial, and intelligence apparatuses behind them, and a vast trove of hundreds and perhaps thousands of Uighur Online articles from which to draw—what long-time Xinjiang researcher Nicholas Bequelin called a “godsend” for authorities looking for “anything critical of ethnic policies”—prosecutors were only able to dredge up the tiniest of slivers. One piece of evidence, such as it is, accuses Tohti of juicing a headline by calling a government workshop on anti-separatism a “brainwashing” exercise. Another complains Tohti posted a guest author’s survey without fact-checking, which the court reasons would require Tohti’s re-conducting the survey himself. Yet another accusation, leveled without supporting evidence, finds Tohti’s site guilty of “hype.”

This entry was posted in Headlines, Internet Freedom, Uighur, Writers in Prison and tagged Ilham Tohti, Uighur. Bookmark the permalink.