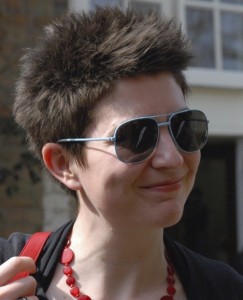 Poetry is revered in China, but is it still a living art form? In 2006, Han Han said modern poetry–and poets–are of “zero value.” Reverence for classical poetry begins when children are taught to recite the verses of masters like Du Fu and Li Bai, but what of poetry that is written today? Heather Inwood, lecturer in Chinese cultural studies at the University of Manchester in the UK, explores the production and performance of contemporary Chinese poetry in her first book, Verse Going Viral: China’s New Media Scenes. Dr. Inwood focuses on the “scenes” of poetry production, rather than analysis of the works produced. Those scenes, both virtual and physical, on the printed page and at live performances, are where poets share and critique each other’s work, interacting as “poet-citizens.” Inwood finds that poetry is indeed alive and well in China, not just as the work of isolated individuals, but as the fruit of a shared cultural practice.

Dr. Inwood and I talked about Chinese poetry scenes and the blurring of online and offline worlds via email:

Heather Inwood: When I was an MA student at Peking University in the early 2000s I got to know quite a few younger generation poets in Beijing and became interested in the discussions that were going on around contemporary Chinese poetry at the time. It was an exciting period to be involved in poetry scenes: Writers born in the 1970s and early 1980s were being described as embodying a new tidal wave of contemporary poetry, at the same time as poets of all ages were moving online and exploring different ways of writing and interacting on poetry forums and blogs. I became fascinated by the discourses surrounding contemporary poetry both within these tight-knit communities of poets, who were approaching poetry with a kind of fervor that many thought hadn’t been seen in China since the 1980s, and among the general Chinese public, who seemed largely oblivious to the fact that poetry was even being written anymore. It was in part this disconnect that made me want to explore the notion of “scenes” further—this English term, plus its various Chinese equivalents, seemed to have a lot to answer for.

CDT: You briefly mention your fieldwork observing live scenes. Would you say that you were a participant observer? How involved did you become in the scenes themselves, as both an audience member and even an active participant?

Inwood: I would certainly describe the fieldwork I did as participant observation. One of the great things about researching contemporary cultural scenes is that there are ample opportunities to be on the scene of culture as it happens and to experience the cultural energy firsthand, whether online or “in the flesh.”

There were some periods of fieldwork when I seemed to be invited to poetry events almost every week across the length and breadth of mainland China. The most involved I became was when asked to share my thoughts on literary debates or recite poems at poetry events; in general I tried to contribute in a way that showed willingness and didn’t offend my hosts, but that did not overly influence the course of the events I was attending. For the most part, poets seemed bemused that I was showing such interest in what they were doing and saying—China’s contemporary poetry world tends not to get as much international attention as other areas of culture such as film or art.
For detail please visit here

This entry was posted in Book Reviews and tagged Heather Inwood. Bookmark the permalink.