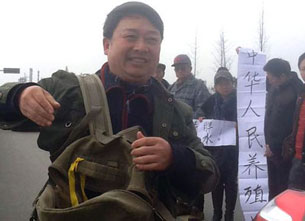 Activist Chen Yunfei leads a protest against alleged pollution at a petrochemical plant in Pengzhou, in Sichuan province, March 6, 2015. Photo courtesy of an RFA listener

Authorities in the southwestern Chinese province of Sichuan have delayed the planned trial on public order charges of a veteran rights activist who visited the grave of a Tiananmen Square massacre victim, his lawyer said.

Former Tiananmen Square protester Chen Yunfei, 48, was initially detained on subversion charges on March 25, 2015 near Sichuan’s provincial capital, Chengdu, after visiting the grave of Tiananmen massacre victim Wu Guofeng along with a group of fellow activists.

He was to have stood trial on Thursday on charges of “picking quarrels and stirring up trouble” after a more serious subversion charge was dropped for lack of evidence, his defense attorney Ran Tong told RFA.

“The whole thing was done very hastily, and I’m baffled by it,” Ran said. “I received a hurriedly scribbled notification this morning [that the trial had been postponed].”

“We had lawyers coming in from out of town, and all the preparation work was in place, and now the trial’s not happening,” he said.

The court gave no clear reason for the decision, nor had it issued a revised trial date, Ran said, adding that considerable financial losses have now been incurred.

The move has also caused great anxiety among Chen’s family and supporters, he said.

“The court has a duty to uphold the dignity and probity of the law, and this does nothing to build public trust in the rule of law,” Ran said.

But fellow defense attorney Liu Zhengqing said he suspects the decision came after a large number of foreign consular officials, including U.S. officials, applied for permits to attend Chen’s trial.

“It’s possible that the Wuhou District People’s Court that was to try him was afraid it wouldn’t be able to cope, and has referred it to a higher court,” Liu said.

Liu said he visited Chen in his police-run detention center on Wednesday.

“Chen Yunfei has got much thinner, but he is still in a fairly positive, optimistic mood,” he said.

Supporter Sun Tao, who had already traveled from the southeastern province of Fujian to attend Chen’s trial, said he had been allowed into the courtroom, which was packed with people, suggesting that the decision to postpone had been made at the very last minute.

“There were a lot of people in the courtroom, as well as large numbers of plainclothes police and state security police,” Sun said.

“I heard later that some rights activists who were wearing T-shirts with slogans printed on them had them confiscated.”

Sun said he believes the trial was called off owing to international media attention around Chen’s case.

“I am guessing that there has been so much international pressure that they are afraid too many people would show up to attend the trial,” he said.

Chen, who has campaigned vigorously for human rights protections and against environmental pollution in the past two decades, last spoke to RFA after he and a group of fellow activists were “forcibly dragged” to the local police station after they gathered outside a petrochemical plant in Sichuan’s Pengzhou county to protest alleged pollution on March 6.

In 2014, the authorities launched a nationwide crackdown on activists and family members of victims of the 1989 military crackdown on the Tiananmen Square student-led pro-democracy movement in the run-up to the 25th anniversary on June 4.

The government bans public memorials marking the event, and has continued to ignore growing calls in China and from overseas for a reappraisal of the 1989 student protests, which it once styled a “counterrevolutionary rebellion.”

The number of people killed when People’s Liberation Army tanks and troops entered Beijing on the night of June 3-4, 1989, has never been confirmed.

Reported by Yang Fan for RFA’s Mandarin Service, and by Wen Yuqing for the Cantonese Service. Translated and written in English by Luisetta Mudie.