China Detains Thousands With Grievances as Year of Rooster Begins 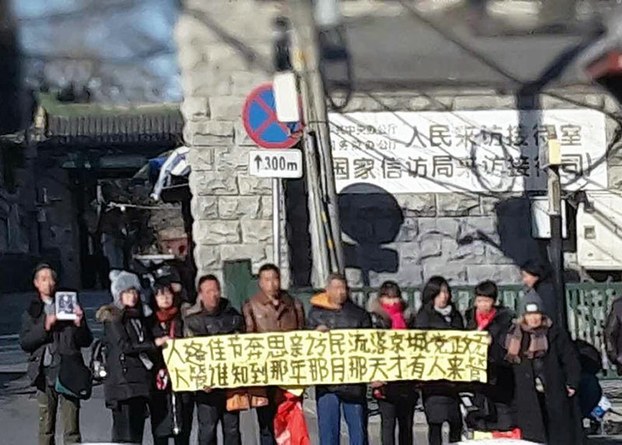 Authorities in the Chinese capital have detained thousands of people who converged there to highlight grievances against government officials in their hometowns, sending them off to start the Year of the Rooster in a detention center.

As the rest of the country got together with family to mark the Chinese New Year, crowds have continued to gather outside central government offices since the first day of the new year on Saturday, some in the hope of paying a visit to President Xi Jinping.

Wu Jixin, a petitioner from the eastern province of Jiangsu, said he had been detained after staging a mini-protest during which he raised a banner with around a dozen fellow petitioners.

But he said local government “interceptors” had been hard at work in Beijing detaining anyone from their region who complained about the government there.

“The local governments are detaining people left, right, and center in Beijing because petitioning puts these governments under more political pressure,” Wu said. “The petitioners just want their grievances to be dealt with.”

He said large numbers of people are now being held in huge detention centers on the outskirts of Beijing for “registration,” before being sent home under the escort of interceptors.

Sun Ning, a second petitioner from Jiangsu, said he had taken public transportation to Zhongnanhai, the headquarters of the ruling Chinese Communist Party leadership, in the heart of Beijing.

“There are very large numbers of police in and around Tiananmen Square right now, maybe 1,000 or so … checking people’s ID,” Sun said. “As soon as they swiped our ID cards, they said we weren’t going any further. They didn’t care if we were tourists or what we were.”

“They said we were on a government blacklist, and they detained us and brought us here to the Youjie police station,” he said, speaking from inside the police station.

Sun said many petitioners had converged on Zhongnanhai to engage in a low-key form of annual protest, wishing President Xi Jinping a Happy New Year.

He said many of them are now sleeping rough in sub-zero temperatures.

“There are so many sleeping rough right now, right there on the street, because they have no money,” Sun said. “It is extremely cold, freezing … about five degrees below freezing in Beijing.”

Repeated calls to the the Youjie police station rang unanswered on Monday.

“They didn’t come out, so we wished the police a Happy New Year instead,” Ji said. “They have worked so hard all year, and we felt bad about causing them all this trouble.”

Among those detained were a group of evictees from Shanghai, according to video footage shot by another petitioner.

“We’re from Sihai in Shanghai. We have no homes any more,” one petitioner told the camera, adding that she is 82 years old.

“We want to rely on the law for redress, because relying on the government was no use at all,” she said.

And petitioner Tang Xinbo, who was herself recently released from detention, told RFA that she had been questioned by police about a video she made of a “New Year’s Eve” party run by petitioners in Beijing.

“I made a video of the petitioners’ New Year party, and they wanted to know who had organized it, who attended, and how the arrangements were made,” Tang said.

She said she had been detained in a raid during which police bashed down the door of the place she was staying, put handcuffs on her, and put her in a restraining chair for several hours.

Interceptors frequently use violence against petitioners on the journey home, activists say, with a string of such incidents reported in recent weeks.

On Jan. 22, a pregnant petitioner from the northeastern province of Heilongjiang said she was beaten, kicked, and bound and gagged on the long road trip home from Beijing.

Earlier this month, petitioners Wang Shetao and Li Xiaocui, of Luoyang’s Liangzhai village, reportedly burned to death in murky circumstances after a fire at a police station where they were detained.

Petitioners also frequently report beatings from police back home, harassment by landlords and employers, and incarceration in psychiatric hospitals when they have no mental illness.

Deaths and “disappearances” in unofficial detention centers, or “black jails,” are also not uncommon, but evidence of police wrongdoing is hard to come by when authorities typically refuse to allow independent autopsies.

Reported by Wong Lok-to for RFA’s Cantonese Service, and by Qiao Long for the Mandarin Service. Translated and edited by Luisetta Mudie.

This entry was posted in Culture, Headlines and tagged detention, petitioner, Year of Rooster. Bookmark the permalink.