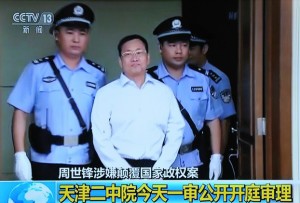 A court in the northern Chinese city of Tianjin sentenced a leading human rights lawyer to seven years in prison on Thursday, the third subversion trial this week of attorneys and activists who were rounded up in a sweeping crackdown on rights defenders a year ago.

Zhou Shifeng, 52, was the director of Beijing’s Fengrui Law Firm, which took on sensitive cases of dissidents, the banned and persecuted Falun Gong spiritual sect and others who challenged authorities. The firm was the main target of a nationwide crackdown that saw more than 300 human rights lawyers and associates detained beginning on the night of July 9, 2015.

“I plead guilty,” Zhou said in his final statement, “My actions have brought instability and risks to society,” said Xinhua.

The report said Zhou would not appeal.

The jailing of Zhou, the first lawyer to go on trial since the crackdown, follows the sentencing Wednesday of activist Hu Shigen to 7½ years. On Tuesday, activist Zhai Yanmin received a suspended three-year sentence.

“When we got there the front gate of the Court House was under strict guard. We then went around the building to the back door of the court, where the security was less strict and we got into the Court,” she said.

“But a guard inside questioned our identity, and we answered as ‘citizens coming to audit the trial.’ He then demanded that we provide citizen IDs and once we produced them, he took us out of the court,” said Li.

‘The law is fake’

Liu Xiaoyuan, former legal colleague of Zhou, told RFA that Zhou’s jail term is “so heavy that it will definitely affect other lawyers considering representing some sensitive cases.”

“Some lawyers may consider their own safety leading to not accept those (sensitive) cases,” said Liu.

Beijing rights lawyer Chen Jiangang said the case should be seen as a political issue.

“We believe that law (in China) is true, but the authorities know that law is a fake. When they want to punish people, they act under the disguise of law,” Chen told RFA.

“For them the judicial system is just a knife or a weapon. Please do not have the illusion that under a dictatorship law can limit the power of the rulers. That is totally unrealistic.”

Along with dissidents, Zhou’s clients also included the parents of children sickened or killed by one of China’s biggest dairies in a massive tainted infant formula scandal that the government had tried to cover up.

“I think they exaggerated the things in this (subversion) case,” the father of one of the tainted milk victims told RFA’s Cantonese Service. He declined to give his name or home province

Reported by Yang Fan and Xin Lin for RFA’s Mandarin Service and Wong Lok-to for the Cantonese Service. Translated by Chen Ping and Wong Lok-to. Written in English by Paul Eckert.