Posted on 01/23/2015 by editor | China leads the world in media corruption, says expert已关闭评论

In September last year, as China saw a series of media scandals, we ran several articles addressing the phenomenon of media corruption. We refer readers back to “Who Warped China’s Media?“; “China’s Corrupt Media“; and “Why News Extortion is So Hard to Uncover.”

Today we offer an excellent follow-up on the issue from one of China’s most knowledgeable media scholars, Foreign Languages University professor and former CMP fellow Zhan Jiang (展江).

Back on October 22, 2014, Zhan Jiang took part in an online discussion at 21ccom.net about media corruption, its causes and possible solutions. The website published the full text of Zhan’s interview yesterday. 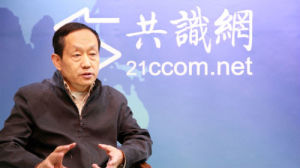 ABOVE: Professor Zhan Jiang discusses media corruption in China with 21ccom.net in October 2014.

As much discussion of media corruption inside China centers on rotten journalists, as though the only relevant dimension is moral, Zhan Jiang’s interview is refreshingly frank. He explains why media corruption is endemic and, you might say, institutionalized.

We’ve translated only about half of the interview, but we strongly encourage readers of Chinese to study the rest.

Host: Hello everyone, I’m 21ccom.net editor Jiang Baoxin (蒋保信). I’m also the hosts of today’s conversation. Hello, Professor Zhan. This is the second time you’ve been a guest in the studio at 21ccom.net, isn’t it?

Host: After we pre-announced this online discussion, we promoted it on our WeChat public account as well, and web users submitted many valuable questions. Today we’d like to seek your expertise on these questions, which I’ve gathered today along with my own questions. Why don’t you first say hello to our web users.