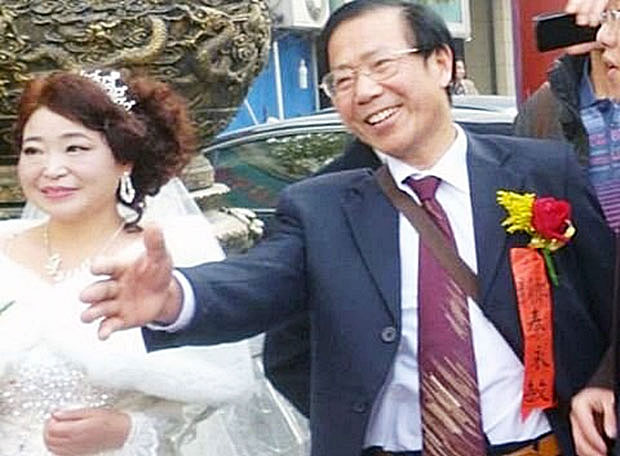 Chinese democracy activist Qin Yongmin and wife Zhao Suli are shown in a photo from October 2013. Photo courtesy of rosechina.net

Authorities in the central Chinese city of Wuhan once more prolonged the pretrial detention of a veteran democracy activist for subversion on Thursday amid growing concerns over the safety of his ‘disappeared’ wife.

Qin Yongmin, a veteran activist and founder of the short-lived, banned opposition China Democracy Party (CDP), was barred from attending the pretrial meeting at the Wuhan Intermediate People’s Court, his lawyer said.

Qin was initially detained in 2015 alongside his wife Zhao Suli, but Zhao disappeared several weeks later, and hasn’t been seen for months. Her relatives say they fear some harm has come to her.

Zhao’s three sisters have mounted a campaign to find her, after the authorities fired her defense lawyer unilaterally.

“Last year, when her three sisters came to Wuhan, an official told them he would carry a letter from them to Zhao Suli, but that they weren’t allowed to see her, or call her on the phone,” Human Rights Watch in China spokesman Xu Qin told RFA.

“The following day, the official told her sisters that Zhao Suli didn’t want to reply to the letter,” said Xu, who accompanied them. “That’s really pretty improbable.”

“Then they discovered that I was filming [the meeting] and they detained me and confiscated my cell phone,” he said.

At risk of torture

Earlier this year, Wuhan police told relatives that Zhao wasn’t in their custody, sparking further concerns that she might be at risk of torture or had died in extrajudicial detention.

Meanwhile, prosecutors told Qin Yongmin’s lawyers that they have enough evidence to convict him of “subversion of state power” by showing that he worked for political reforms in China by advocating a “peaceful transition” to a democratic society.

“Qin Yongmin has published a book on the peaceful transition in Hong Kong, and he has posted a lot of articles online and in QQ chatrooms in recent years,” his defense lawyer Ma Lianshun said.

“All of this is being used as evidence to support the subversion charges.”

Ma said the defense team will say more when it has reviewed all of the case files.

Fellow lawyer Li Chunhua said the defense team would be arguing that Qin is not guilty, however.

“We are of the opinion that [Qin’s actions] do not constitute a crime,” Li said. “We accept all of the facts of the case, but we don’t think that they add up to criminal behavior.”

Qin is currently being held at a police-run detention center in the central city of Wuhan. His location was only discovered by accident, and his first meeting with a lawyer came 17 months after his detention.

Qin and Zhao were initially reported missing on Jan. 19, 2015, amid unconfirmed reports that he had been tried in secret.

But family and fellow activists continued to hunt for the couple, and Qin’s lawyers tracked him down to an anonymous, numbered entry in a logbook at the Wuhan No. 2 Detention Center.

A contemporary of exiled dissident Wei Jingsheng, Qin was sentenced to eight years in prison for “counterrevolutionary propaganda and subversion” in the wake of China’s Democracy Wall movement in 1981.

Qin then served a 12-year jail term for subversion after he helped found the CDP in 1998 in spite of a ban on opposition political parties.

“Subversion of state power” carries a minimum jail term of 10 years in cases where the person is judged to have played a leading role. Jailed Nobel peace laureate Liu Xiaobo is currently serving a 13-year sentence for “incitement to subvert state power.”

Reported by Xin Lin for RFA’s Mandarin Service, and by Hai Nan for the Cantonese Service. Translated and written in English by Luisetta Mudie.