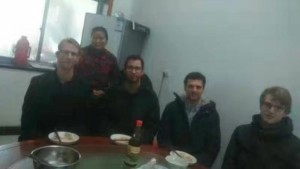 Authorities in the central Chinese province of Hunan are preparing to try a top lawyer on subversion and public order charges, amid an ongoing crackdown on human rights lawyers and activists nationwide.

The case of Xie Yang has now been transferred from the state prosecutor’s office to the No. 2 Intermediate People’s Court in the provincial capital Changsha, paving the way for his trial for “incitement to disrupt public order and subvert state power,” his wife told RFA on Wednesday.

“Neither I nor the lawyer had any verbal or written notification from them,” Xie’s wife Chen Guiqiu said. “It wasn’t until I called the Changsha prosecutor’s case management department myself to ask whether the case had gone to the court that they told me it had.”

Xie was detained in a nationwide police operation targeting more than 300 rights lawyers, law firm staff and activists that began with the detention of lawyers at the Beijing Fengrui law firm on July 9, 2015.

Chen tried to hire lawyer Lin Qilei to defend Xie, but the authorities refused to acknowledge his status as Xie’s lawyer.

Lin said Xie had been illegally kidnapped, subjected to enforced disappearance and tortured while in detention, and that the authorities have failed to follow due process throughout his case.

“In most cases, they should inform the lawyer when a case goes to court, even if they don’t inform the family,” Lin said.

“These kinds of cases are ignoring due process, and just using the law as a means of repressing these people,” he said.

“They haven’t implemented any of the rules involving the client’s right to meet with their lawyer.”

Top rights attorney Jiang Tianyong was also detained last month in Changsha after visiting Chen in a bid to support the family, and is now under criminal detention on suspicion of “revealing state secrets overseas” and using another person’s ID card.

Jiang had been under constant police surveillance, and his wife said he had likely used a friend’s ID in a bid to evade detection by the authorities when buying a ticket to return to Beijing on Nov. 21.

“There is a lot of concern among diplomatic officials [about Jiang] because he had a lot of dealings with foreign embassy officials,” Shang said.

“There were diplomats from France and Germany among them,” he said.

More than 300 lawyers, law firm staff, rights activists and relatives were detained, questioned, or placed under surveillance or other restrictions since the crackdown began.

At least 16 remain in criminal detention on subversion charges, while four have been handed jail terms of up to seven years, according to the Hong Kong-based Chinese Human Rights Lawyers Concern Group.

Many others have been denied access to lawyers, and to family visits.

“The majority of the victims of the July 9, 2015 crackdown have been denied permission to meet with lawyers hired for them by their families,” artist Zhang Xiao, who is documenting the crackdown, told RFA.

“Reports are emerging that … Xie Yang has been subjected to beatings, burnings with lit cigarettes, while Jiang Tianyong has [previously] been tortured,” Zhang said.

“I think that if the authorities aren’t allowing the detainees to see lawyers, then there are definitely shenanigans going on behind the scenes, whether it’s torture, extreme duress, threats to their family members, lies or whatever,” he said.

He said he would continue to use art to highlight the ill-treatment of lawyers and activists during the crackdown.

Reported by Xin Lin for RFA’s Mandarin Service, and by Ng Yik-tung and Goh Fung for the Cantonese Service. Translated and written in English by Luisetta Mudie.