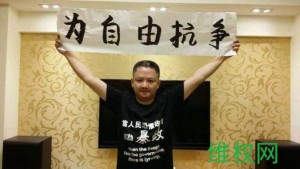 Ye Xiaozheng displays a banner saying ‘Protesting for Freedom’ in a photo posted to social media.
Photo courtesy of CHRD
An activist from the southern Chinese province of Guangdong stood trial on Thursday for subversion after he showed online support for last year’s pro-democracy Occupy Central movement in neighboring Hong Kong.

Ye Xiaozheng, known online by his nickname Humian Yizhou (“A boat on the lake”), stood trial at the Huicheng District People’s Court in Guangdong’s Huizhou city for “incitement to subvert state power,” his lawyer told RFA.

“The authorities gathered a lot of material for this case, to try to prove the material facts of the crimes Ye Xiaozheng is accused of,” his lawyer Liu Hao said after the trial.

“But Ye Xiaozheng denied the details as claimed on the charge sheet [relating to subversion].”

“As his defense lawyers, we felt very sad, as all we could do was make our argument according to the law,” Liu said. “We gave it our best shot.”

“Now they are gathering the evidence to support these so-called charges.”

The trial was adjourned at 11.20 a.m. after less than two hours, with a further hearing to be announced later, Ye’s wife Zhong Yongmei told RFA.

“The charge sheet named Li Jianjun as the informant who said that Ye had supported Occupy Central, and our lawyer asked for Li Jianjun to appear in court,” Zhong said, adding that Ye hadn’t contested the fact that he sent out the post.

“He said that the post he is reported to have made was factual,” Zhong said, adding: “Now the trial is adjourned, and will continue another day.”

She said several of Ye’s relatives were allowed to attend in the public gallery.

Ye was formally arrested and charged with subversion in January after posting a photo of himself online during Hong Kong’s Umbrella Movement last year, holding a banner saying “Protesting for Freedom” and wearing a T-shirt with the slogan: “When the people fear the government, then there is tyranny.”

Initially detained on Dec. 18 by Huizhou police, Ye has complained of being shackled for long periods and being subjected to “harsh interrogation” at the police-run Huizhou Detention Center, rights groups have said.

A vocal activist who has previously posted online in support of democratic reforms and constitutional government and against official corruption, Ye has said he is “psychologically prepared” to do time in jail.

Elsewhere in Guangdong, which has close cultural ties with the former British colony of Hong Kong, activist Wang Long said he had been warned off trying to attend Ye’s trial by police in his hometown of Shenzhen.

“I got a tweet inviting me to go and attend the trial in Huizhou,” Wang said. “Not quite half an hour later, the police came to my door.”

“It seems that their intelligence reports are very timely,” said Wang, who was himself detained on suspicion of “picking quarrels and stirring up trouble” and held for seven months after voicing support online for the Occupy, or Umbrella, movement in Hong Kong.

He said the authorities aren’t just targeting activists now, but also anyone who publicly supports them.

“Whether it’s the Guangdong provincial authorities going after supporters or citizens who followed the Occupy Central movement, the entire country is getting more and more repressive,” said Wang, whose ID card and residence documents have now been confiscated.

“This is big trouble, because you need an ID card to buy train or plane tickets, or to deal with the banks, even to look for a job,” Wang said.
For detail please visit here