Chinese Activists Send Cards to Hundreds of Prisoners of Conscience 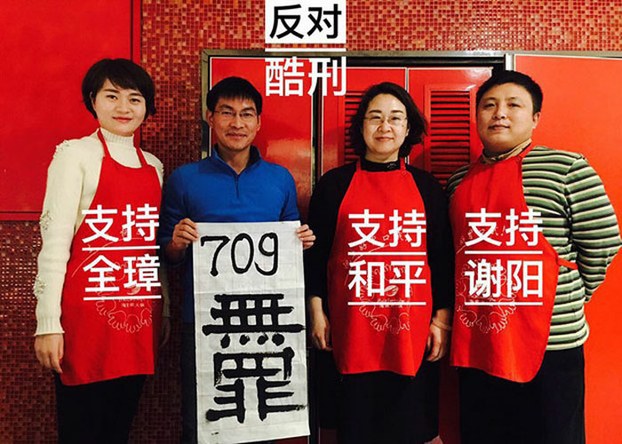 Family members of Chinese human rights lawyers jailed since a July 2015 crackdown, in undated photo. Courtesy of an RFA listener.

Rights activists in China have launched a greetings card campaign for political prisoners around the country ahead of Chinese New Year celebrations on Jan. 30, as foreign diplomats paid visits to embattled activists faced with eviction in Beijing.

The campaign started with the mass mailing of some 200 greetings cards to jailed prisoners of conscience, sent by around 100 fellow activists, they told RFA.

“Chinese New Year is nearly upon us, and so some of us petitioners here in Beijing wanted to wish a Happy New Year and express our care for these innocent people who are now behind bars,” Wu said.

He said petitioners, people who pursue long-running complaints against official wrongdoing, often to no avail, are best-placed to understand what political prisoners stood for.

“[Many political prisoners] used to help out vulnerable groups and petitioners, and made a definite contribution to society, and to social progress,” he said.

“If rights activists don’t stand up for justice, then nobody will, and the dark side of society would get even darker,” Wu said. “They cared about us, so we care about them, and we want to support them.”

He called on the ruling Chinese Communist Party to release all political prisoners, and to protect citizens’ rights.

“They talk about the rule of law, but they don’t rule by law at all,” he said. “They use that slogan as a stick to beat people with instead.”

An outrage ‘getting worse’

In Hong Kong, pan-democratic lawmaker and veteran activist Leung Kwok-hung said 2010 Nobel peace laureate Liu Xiaobo is China’s most famous political prisoner, but there are many more besides, including human rights lawyers.

“Throwing people in jail for what they say? It doesn’t get much grubbier than that,” Leung said. “It’s an outrage, and it’s getting worse.”

“We can see how they carried out a massive series of detentions of rights lawyers all around the country, starting on July 9, 2015,” he said. “They went after anyone who wouldn’t do as they were told.”

Meanwhile, diplomats from the U.S., Canada, the U.K., Germany and other E.U. countries visited beleaguered women’s rights activist and artist Ye Haiyan and poet Wang Zang in their homes ahead of Chinese New Year.

Chinese artist and feminist Ye Haiyan, known as “Hooligan Sparrow,” the eponymous subject of an award-winning documentary about her activism, is camping out in sub-zero temperatures at her home in Beijing’s Songzhuang artists’ village after authorities cut off her water, electricity and heating.

Ye had previously been issued with the threat of eviction if she didn’t stop posting on social media, but refused to comply.

Similar treatment has been meted out to her neighbor, the activist and poet Wang Zang, who has three young children.

The authorities have put increasing pressure on both households to move out in recent weeks.

Wang said he received a visit on Wednesday from the diplomats, who came with veteran rights activist Hu Jia.

“They [all] expressed their concern over our family’s situation,” he said. “When they were done visiting us, they went over to Ye Haiyan’s house, and expressed similar concerns over their situation.”

“The E.U. ambassador … said he wished me and my family a Happy Chinese New Year, and good health and fortunes in the Year of the Rooster,” he said. “I am extremely grateful for their hard work for human rights.”

“They brought me a New Year greetings card,” she said. “They thought it was very strange that my water and electricity were cut off, and they asked me why it was.”

“I told them that there is no correct answer in the end, and that I don’t really understand it myself.”

Ye has previously said her recent troubles began after she penned an online article hitting out at China’s growing Maoist movement for its trolling of liberal intellectuals.

“I had visits today from three diplomats, from Germany, the E.U. and Sweden,” Ni said. “They said that some uniformed police tried to stop
them coming in at the door, and asked them where they were going.”

“They said they were coming to see me, and they weren’t prevented from doing so,” she said. “They brought me a card, signed by diplomats from eight different countries, including ambassadors.”

“They asked me about my life, how I’ve been doing lately, and if they could offer me any assistance,” she said.

Ni said she remains under heavy police surveillance, however.

“Somebody follows me wherever I go, and the police have told my landlord not to let me rent this place any more,” she said. “It’s very hard for us to find a [secure] place to live right now.”

Reported by Lee Lai for RFA’s Cantonese Service, and by Qiao Long for the Mandarin Service. Translated and edited by Luisetta Mudie.