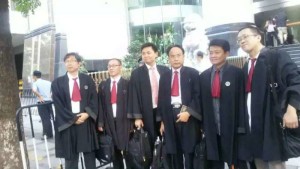 Authorities in the southern Chinese province of Guangdong called off the trial of three prominent rights activists after they dismissed their defense team amid a procedural dispute with court officials, lawyers said on Friday.

Rights lawyer Tang Jingling, former teacher Wang Qingying, and writer-activist Yuan Xinting, known as the Guangzhou Three, were scheduled to stand trial on Friday at the Guangzhou Intermediate People’s Court for “incitement to subvert state power” after being held in a police detention center for more than a year.

Defense lawyers said they had insisted the defense be allowed to call witnesses, but their request was refused by the bench.

“The court has repeatedly broken the law and infringed on the rights of the defendants,” defense attorney Ge Wenxiu told RFA after the trial was adjourned mid-session on Friday.

“The court refused to accept the correct opinions of the defense lawyers, who had no way to protect their clients’ interests after that.”

“So all three defendants terminated their instruction to their lawyers,” said Ge, adding that the court was then forced to pull the plug on the proceedings.

Tang, Wang, and Yuan were criminally detained on May 16, 2014, initially for “picking quarrels and stirring up trouble,” but the charges were later changed to the more serious “incitement to subvert state power.”

Tang has maintained his innocence of the charges against him, which came amid a nationwide roundup of dissidents ahead of last year’s politically sensitive 25th anniversary of the military crackdown on the 1989 student-led pro-democracy movement.

His wife, Wang Yanfang, told RFA that security was very tight around the court buildings when she arrived to attend the trial.

“We were getting ready to go in, and there were plainclothes police taking video of us, and they cursed me out when I asked them about it,” Wang said.

“Then they shoved me into their police car, forcibly, and then they pushed Wang Jingying’s wife into the car as well.”

She said some 20 other supporters from outside the court building were also detained. “I didn’t know any of them,” Wang added.

The overseas-based Chinese Human Rights Defenders (CHRD) network said all three defendants had been held for an unreasonably long time before the case came to court.

“The three spent over one year in pretrial detention before a judge heard the case,” the group said on Friday in a statement on its website.

It said Tang and Wang had both made allegations of torture in detention, which were never investigated.

The New York-based Human Rights Watch (HRW) called ahead of the trial for the Guangzhou Three to be released.

“Reading and debating books is no crime, nor is it a basis for mistreatment, torture, or denying basic rights to a fair trial,” HRW China director Sophie Richardson said in a statement on the group’s website.

“If anyone has made a ‘serious political mistake,’ it’s the authorities who seek to crush peaceful debate about China’s future,” Richardson said.

The Chinese government should immediately release the three lawyers and drop all charges against them, HRW said.

“Incitement to subvert state power” can carry sentences of up to 15 years in prison, where the defendant is judged to be a “ringleader.”

According to rights lawyers, and HRW, the use of subversion charges to jail peaceful activists and dissidents contravenes Article 35 of the Constitution of the People’s Republic of China, which guarantees freedom of expression to all citizens.

Both Yuan and Wang have complained to RFA via their lawyers of repeated beatings and mistreatment inside the police-run Guangzhou No.1 Detention Center.
For detail please visit here

This entry was posted in Headlines, Writers in Prison and tagged Tang Jingling, Wang Qingying, Yuan Xinting. Bookmark the permalink.