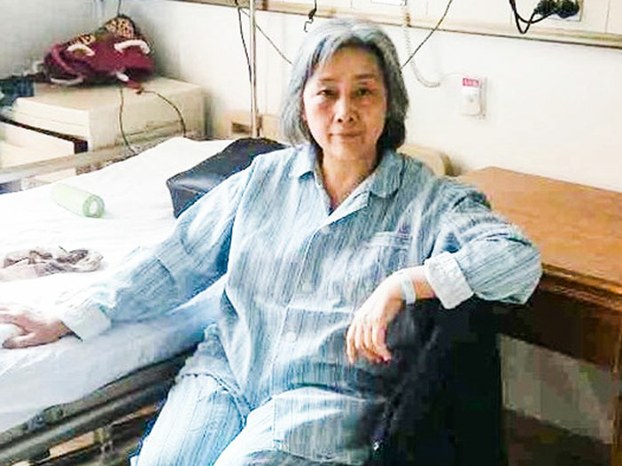 Journalist Gao Yu in the Beijing’s Anzhen Hospital after her garden and office were demolished, April 5, 2016. Su Yutong.

Veteran journalist Gao Yu was hospitalized on Tuesday when the 71-year-old fell ill after her garden and home office were demolished by Chinese authorities last week, sources told RFA.

Police and urban management officials, known as “chengguan,” raided her Beijing home on March 31, tearing down what they claim was an illegal garden and structure while they roughed up Gao’s son Zhao Meng .

Gao was admitted to Beijing’s Anzhen Hospital on Tuesday after falling ill, which sources close to the family said was linked to stress caused by the unannounced demolition raid.

“She has had a full battery of tests from head to foot, so they can find out what’s wrong with her,” Zhao Meng told RFA. “Then she can take medication according to the diagnosis.”

Gao was sentenced to a seven-year jail term in 2015 for “leaking state secrets overseas,” but the sentence was cut on appeal to five years by the Beijing High People’s Court last November.

She was later released to “serve her sentence outside jail,” but has been refused treatment at a number of Beijing hospitals and clinics. A source close to the family told RFA that the authorities have had a change of heart and are now paying for her treatment.

“I think that this is being paid for by specially approved funds, not her insurance,” the source said. “She told me the state security police are paying, anyway.”

“Gao doesn’t have any money, and she has had no income of any kind since getting out of prison.”

The source said Gao was exhausted from the stress of the raid on her home, and that “somebody” had arranged for her to be admitted to hospital.

“She thought she’d better go in right away,” the source added.

Gao had earlier spoken out about the demolition of her property, but added that her parole requires her to refuse to give interviews.

In a Wednesday interview Zhao said his mother will likely remain in hospital for at least a week.

Bao Tong, a former top aide to late former premier Zhao Ziyang, hit out this week at the raid on Gao’s home, saying it was “a common sight” for people in Beijing to make use of space around their homes as she did.

“If everybody is acting illegally, then why single out Gao Yu from among them?” Bao wrote in a commentary for RFA’s Mandarin Service, adding that government departments are no exception.

“There are quite a few ‘illegal structures’ around the State Council, as they know very well,” Bao said. “Why haven’t the state security police moved in to demolish them as well, or the chengguan come in to tidy the place up a bit?”

Bao said the attack on Gao’s home brought back painful memories of losing his own home after being released from a seven-year jail term for “counterrevolution” in the wake of the 1989 Tiananmen Square massacre.

“After I was released from my seven-year jail term in 1996, I had the right to return home, according to the law,” Bao wrote. “But the central leadership decided that they weren’t going to proceed according to law, but according to the [ruling Chinese Communist] Party.”

“They sent the order that I could only be released home if I agreed to move elsewhere, and so I … started living in some buildings that would also be classed as illegal structures,” he said.

Shortly after the turn of the century, Bao received a directive from the chengguan informing him that his home was in an “illegal structure”.

“But that building is still standing,” he wrote. “This is clearly a case of selective law enforcement.”

“A building is illegal if they say it’s illegal. If they want to protect it, they’ll protect it, and if they want to demolish it, then they’ll do that too,” said Bao, who has been under continuous surveillance and repeated house arrest since his release from jail.

This entry was posted in Culture, Headlines and tagged Gao Yu, hospital. Bookmark the permalink.