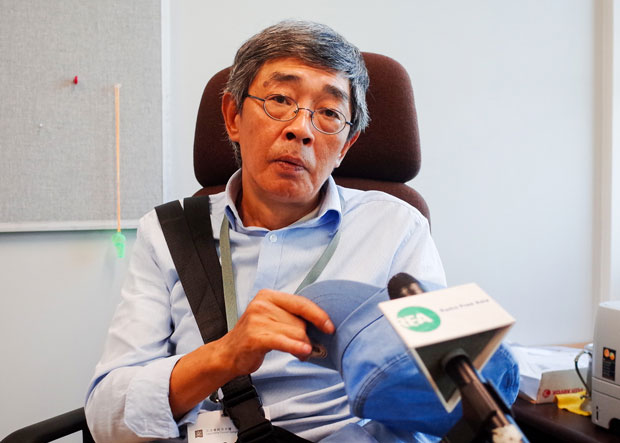 Police in China’s eastern city of Ningbo have called on bookseller Lam Wing-kee, whose explosive revelations of eight months in Chinese detention rocked his native Hong Kong, to return to the mainland to cooperate with an investigation.
The Ningbo Public Security Bureau said in a statement that Lam, 61, had violated bail laws in speaking about his detention and would face “criminal compulsory measures in accordance with the law” if he failed to return.

The request for Lam’s return, which raised fresh concerns about due process and justice in China in a case which has spooked Hong Kong people , came as Hong Kong officials were visiting Beijing on Tuesday in talks over communication between China and the formally autonomous Hong Kong over citizens detained on the mainland.

Lam has said he was effectively kidnapped after crossing Hong Kong’s border into the southern Chinese city of Shenzhen,  blindfolded and taken to far away Ningbo, where he was held in a cell without access to a lawyer for eight months.

He is the only one of five detained employees of the now shuttered Causeway Bay Books store to defy Beijing by speaking in public about his interrogation at the hands of a special task force of state security police.  The five, who were accused of shipping banned books about Chinese leaders into the mainland, later turned up in China, and were shown on state media purportedly confessing to their crimes.

“That a Chinese Public Security Bureau urges a person to return to mainland China  to cooperate with investigation is not an issue, but the use of the term ‘compulsory measures’ seems like a threat, because Hong Kong has no formal extradition agreement with mainland,” to said.

“It would make an associative connection with ‘by force’ if you said that,” he added.

The South China Morning Post quoted Hong Kong Chief Executive Leung Chun-ying as saying he hoped eventually to work out with Beijing a notification system similar to that which China applies to foreign governments.

“The starting point … is that we want to know as soon as possible when a Hong Kong resident is arrested by a jurisdiction outside of Hong Kong,” Leung said.

“That applies to foreign governments and should also apply to the mainland, because we are two systems.”

Hong Kong was returned by Britain to China in 1997 under a deal which allows it to main for 50 years a range of civil and political freedoms that do not exist on the mainland. The booksellers’ case, however, has sparked fears that Hong Kong’s liberties are already eroding under pressure from Beijing.

Lam was slated to lead a pro-democracy march Friday to mark the 19th anniversary of  Hong Kong’s handover from Britain to China, but pulled out at the last minute, citing security threats.

Lam, his colleagues Lee Bo, a British passport holder, Lui Por, and Cheung Chi-ping were all taken to the mainland in connection with the case, then returned to Hong Kong. A fifth colleague, Swedish national Gui Minhai, was abducted from Thailand and gave a confession on Chinese state television,  but has yet to be returned.

Reported and translated by RFA’s Cantonese Service. Written in English by Paul Eckert.