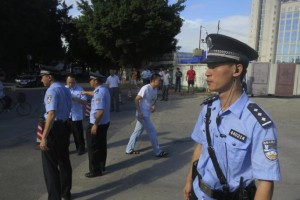 A prominent Chinese rights activist, Guo Feixiong, was sentenced to six years imprisonment on Friday by a court in southern China, amid a continuing crackdown on human rights advocates across the country, his lawyer said on Friday.

Two other activists, Liu Yuandong and Sun Desheng, were sentenced to three years and two-and-a-half years respectively, according to Guo’s lawyer, Zhang Lei.

Guo and Sun had been accused of “gathering crowds to disturb social order” during a nearly week-long peaceful demonstration outside the gates of a newspaper, the Southern Weekly, in January 2013. The protest called on authorities to respect media freedoms amid a censorship row.

“He wasn’t guilty of anything at all. This sentence is unacceptable and unfair,” Zhang told Reuters by telephone after attending the court on Friday. Guo had previously been jailed for nearly five years for his grassroots activism.

Guo, 48, whose real name is Yang Maodong, had been detained by Chinese authorities for over two years before sentencing, with his trial stuck in limbo due to delays and a boycott by his lawyers last year to protest what they called procedural violations.

As with previous hearings for Guo, and other rights activists in Guanghzou, the area around the court was blocked off and heavily policed.

Guo had been held in a crowded cell, and barred from exercising outside in violation of international standards on the treatment of prisoners, according to rights groups. His lawyer said Guo’s health had deteriorated and that two police officers had handled his Guo roughly in court, injuring his arms.

Amnesty International said Sun Desheng had been forced to wear handcuffs and leg cuffs for long periods in detention.

A Chinese court on Thursday upheld a conviction against a prominent journalist, Gao Yu, 71, who was accused of leaking an internal Communist Party document to a foreign website but reduced her seven-year jail term by two years.

“The Chinese government should immediately drop all charges against Guangzhou activists Guo Feixiong and Sun Desheng and release them.”