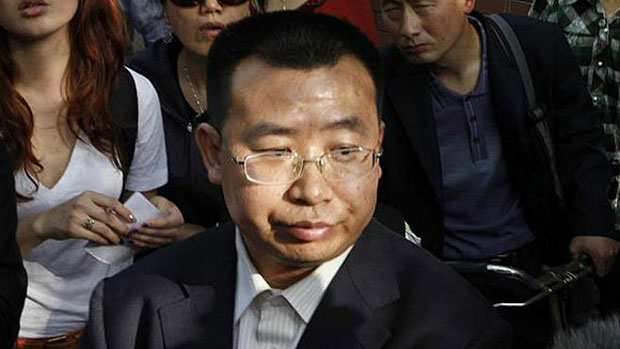 Authorities in the central Chinese province of Henan have allowed prominent human rights lawyer Jiang Tianyong to return to his parents’ home, three days after his release at the end of a two-year jail term.Jiang had been scheduled for release from Henan’s Xinxiang No. 2 Prison on Thursday, at the end of his incarceration for “incitement to subvert state power.”

But his family and supporters were told that “he has already been taken away by someone else” by prison authorities when they went to meet him outside the prison gates.

State security police escorted him to his parents’ home to be reunited with his family at around 4:00 p.m. on Saturday, his U.S.-based wife Jin Bianling told RFA.

In a video clip recorded from a call to his sister, Jiang hints at continued restrictions on him following his release, however.

“I am very grateful to everyone for their concern,” Jiang says in the video. ”I know you have all been very worried.”

“I’m doing OK,” he says. “But I am still stripped of my political rights now that I am at home.”

Human rights attorney Lin Qilei said the concept of “deprivation of political rights” is only vaguely defined in Chinese law.

“There is no clear indication in the law to say that you can be prevented from leaving the country, or coming and going, or told where to go,” Lin said. “We need to realize that the authorities are likely to just disappear him again after allowing him to show his face in public.”

“The international media needs to keep watching this,” he said.

Jin, who recently spoke to Jiang on a video call, said concerns remain about her husband’s health, even though he has been allowed to go home for the time being.

“He looked thinner to me, and a little sallow,” she said. “He told me that he remains stripped of his political rights.”

“I was excited to talk to Jiang Tianyong today, but I am still very worried that he could disappear again, so I hope the international community will continue to pay attention.”

‘Speculating, inciting, and stirring up’

Jiang, who pleaded guilty to “incitement to subvert state power” at the Intermediate People’s Court in the provincial capital Changsha on Aug. 22, was sentenced in November 2017.

His sentence was based on his setting up of a campaign group in support of rights lawyers detained in a nationwide police operation targeting the profession since July 2015, the court said at the time.

He was accused of “speculating” on politically sensitive cases and “inciting others to illegally gather in public places” and “stirring up” public opinion, the indictment said.

Rights lawyer Xie Yang, who was among more than 300 human rights lawyers, activists and law firm staff detained, questioned and placed under restrictions since July 2015, said Jiang’s reappearance at his family home didn’t mean he was fully free, however.

“The fact that he is home and has been able to speak with his wife doesn’t mean he is fully free,” Xie told RFA. “He could just be paying a visit under the supervision of the state security police.”

Rights activist Wang Qiaoling, who is also the wife of detained rights lawyer Li Heping, had been taken in for questioning and prevented from visiting Jiang when she showed up at his parents’ home on Saturday, he said.

“If Jiang Tianyong were completely at liberty, then Wang Qiaoling going to visit his parents wouldn’t have had the local police on alert,” Xie said. “This happened to me as well; in a totalitarian system, the authorities don’t take the law seriously.”

The New York-based group Human Rights in China (HRIC) called on the international community to speak out on Jiang’s behalf.

“The international community must not accept the totalitarian project underway in China as just another crackdown phase,” HRIC executive director Sharon Hom said in a statement.

“Only in a lawless regime that continues to trample on human rights and human dignity can someone be imprisoned for legitimate exercise of rights, and serve his full sentence only to be disappeared into a larger prison outside,” Hom said.

Despite his home visit, Jiang won’t be allowed to move back to his hometown in Xinyang or to Beijing, where he was living before his arrest, HRIC said.

During his sentence, Jiang’s family learned that he was forced to take “unidentified” medication in prison.

“During one prison visit, his father saw him sitting on a metal chair with manacles attached,” HRIC said.

Jiang’s family members had earlier warned that he might not regain all of his freedom, following notification from state security police that he wouldn’t be allowed to return to them.

State security police said they would be taking him instead to the provincial capital Zhengzhou, where they would find him a place to live and a job, his family members said.

Reported by Ng Yik-tung and Lau Siu-fung for RFA’s Cantonese Service, and by Wang Yun for the Mandarin Service. Translated and edited by Luisetta Mudie.