Chinese Students in US Urge Justice for Tiananmen Massacre 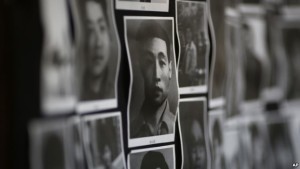 FILE – Portraits of victims of the June 4, 1989 bloodshed are displayed at the June 4 Memorial Museum run by pro-democracy activists in Hong Kong.

The letter, written by University of Georgia graduate student Gu Yi and co-signed by 10 other students, is the latest attempt to challenge China’s intense propaganda campaign surrounding the incident, during which hundreds and possibly even thousands of peaceful protesters were killed.

It has also become an annual tradition for Beijing to round up and temporarily disappear sensitive figures ahead of the anniversary.

US calls for release of activists

U.S. State Department spokesman John Kirby called on China to release activists detained on Tiananmen-related charges and to stop harassing those who want to commemorate the anniversary.

“The United States urges the Chinese government to uphold its international commitments to protect human rights and fundamental freedoms,” Kirby said in a statement.

Beijing does not allow any public discussion or commemoration of the Chinese People’s Liberation Army’s June 1989 massacre of the student protesters, who had gathered in central Beijing and elsewhere across the country to call for democratic reforms and an end to rampant official corruption.

As a result, many young Chinese are unaware of the even the basic details of what is seen as one of the most defining moments in the history of the Chinese Communist Party. The writers of the letter hope their efforts will help increase public awareness in China.

‘Killers must be tried’

“The more we know, the more we feel we have a grave responsibility on our shoulders,” the letter reads. “We are writing you this open letter, fellow college students inside China, to share the truth with you and to expose crimes that have been perpetrated up to this day in connection with the Tiananmen Massacre in 1989.”

“We do not ask the CCP (Chinese Communist Party) to redress the events of that spring, as killers are not the ones we turn to … clear the names of the dead, but killers must be tried. We do not forget, nor forgive, until justice is done and the on-going persecution is halted,” the letter continues.