Dark days ahead for press in China, warns French journalist after expulsion

Posted on 01/01/2016 by editor | Dark days ahead for press in China, warns French journalist after expulsion已关闭评论 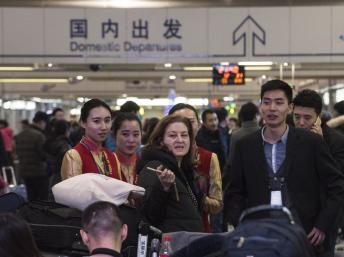 Ursula Gauthier (L), the Beijing-based correspondent for French news magazine L’Obs, speaks with hostesses at the airport before she takes her flight back to France, in Beijing on December 31, 2015. AFP PHOTO / FRED DUFOUR

A French journalist forced to leave China because of a critical article she wrote on the government’s policy in the troubled Xinjiang province, arrived back in France on Friday. Beijing accused Ursula Gauthier of supporting terrorism to justify not renewing her visa. She says the future looks bleak for journalists in China who challenge authorities.

“What happened with this small article about Xinjiang could happen with anything else,” Ursula Gauthier said on Thursday, before being thrown out of China.

“This could be really dangerous in the future.”

What began as a simple article questioning Chinese authorities’ comparisons between global Islamist violence and unrest in the homeland of the mainly Muslim Uighur ethnic minority, ended on Friday in Gauthier’s forced return to France after a decade.

The China correspondent for France’s L’Obs news magazine had challenged Beijing’s motives in expressing sympathy for the victims of the November 13 Paris attacks. She argued that they could be part of a broader strategy to justify the government’s clampdown on Uighurs in the troubled Xinjiang province.

Her comments did not go down well. In retaliation, Beijing refused to renew her credentials, forcing her to leave on December 31 when her visa expired.

France and Europe should be “concerned about what is going on here, not because it is a journalist, not only because of the freedom of press, but also because it is about China and what China is doing to its minorities, and even its majority, the problem is the same,” Gauthier reckoned.

After landing in France, the French journalist vowed to continue writing about China and condemned Beijing over her effective expulsion.