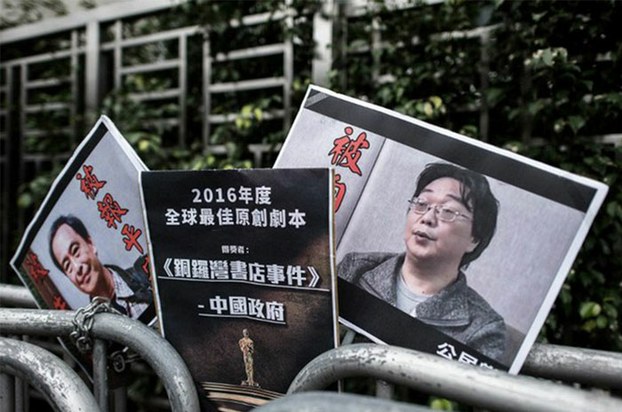 The daughter of a Swedish national, who was detained by China under opaque circumstances, is calling on the United States to press Beijing for his release.

Angela Gui, daughter of Hong Kong publisher Gui Minhai, told a hearing of the Congressional-Executive Commission on China (CECC) that her father is unlikely to have left his holiday home in Thailand voluntarily, in spite of having said so in a televised “confession.”

“If this is true, then we might ask why there was no record of him leaving Thailand,” she said. “Only a state agency acting coercively and against both international and China’s own law could have achieved such a disappearance.”

“I still have not been told where he is; how he is being treated; and what his legal status is, which is especially shocking in light of the fact that my father holds Swedish and only Swedish citizenship,” Angela Gui said.

“The Chinese have detained my father without trial or charges,” she said, adding that Beijing seems to have warned her from speaking out about his situation.

“In November and in January, he sent me two messages on Skype telling me to keep quiet – as his daughter, I could tell he sent these under duress,” Angela Gui said.

“I want my testimony to be a reminder … that my father, a Swedish citizen, was abducted by Chinese state agents from a third, sovereign country, and is still in unofficial and illegal detention somewhere in China, without access to consular visits or legal representation,” she told the CECC hearing titled “The Long Arm of China.”

“Despite having been told to stay quiet, I believe that speaking up is the only option I have,” she said, adding: “I am convinced that my father would have done this for me, were I the one illegally abducted and detained with no indication of time frame.”

She wrapped up her testimony with a direct appeal to Washington.

“I want to ask the United States to take every opportunity to ask China for information on my father’s status, as well as urge that he be freed immediately,” she said.

Gui Minhai disappeared around the same time as four of his colleagues at Hong Kong’s Causeway Bay Books.

Store manager and British passport-holder Lee Bo, 65, went missing from his workplace in Hong Kong on Dec. 30, while general manager Lui Bo (also spelled Lui Por), and colleagues Cheung Chi-ping and Lam Wing-kei are believed to have been detained during trips to China from their usual base in Hong Kong.

The U.K. government has said in an official report that Lee was “involuntarily removed” from the city, which has maintained a separate law enforcement jurisdiction and an internal immigration border since returning to Chinese rule in 1997.

And the U.S. State Department said in its Hong Kong Policy Act Report earlier this month that the booksellers’ detentions “have raised serious concerns in Hong Kong and represent what appears to be the most significant breach of the “one country, two systems” policy since 1997.”

After the hearing, Angela Gui said she believes the Chinese police claim that her father is being held in connection with a drunk-driving incident a decade earlier is fabricated.

“The document that was presented as evidence for this car crash has the wrong name,” she told RFA. “It’s the wrong spelling.”

Asked if the car crash case was a fabrication, she replied: “I would believe so. I never heard anything about an accident. It seems very unlikely to me that such an accident should have happened.”

She added: “Since his disappearance, I’ve been in touch with the Swedish police and I’ve asked about this alleged accident, and I’ve been told that there haven’t been any reports filed to Interpol for his arrest, which would be very strange … if they’re taking it so seriously.”

Angela Gui said she also had strong doubts about Lee Bo’s claim that he voluntarily crossed the border, leaving no trace in official records, to help Chinese police with their inquiries.

“It’s quite clear to me that Lee Bo was told to say these things, and that he’s not free,” she said.

“I find the facts very troubling,” the Democratic lawmaker said. “You have a Swedish citizen being abducted by China, and this is now no longer China doing things against its own people; it’s actually reaching out and abducting a foreign national.”

“This is something that should not be happening. It’s a violation of international law,” Lieu said.

Under the terms of the handover and the Basic Law, China has promised to allow Hong Kong to continue with its existing way of life until 2047, acting as a separate jurisdiction for law enforcement and immigration purposes, and with wide-ranging freedoms of expression and association.

But Andrew To, former leader of Hong Kong’s pan-democratic League of Social Democrats, said the booksellers’ disappearance has punctured confidence that China is sticking to its promises.

“This is the first time I have heard that the Chinese government even got Gui’s name wrong,” To said.

“The whole business involving Lee Bo and Gui Minhai is very suspicious,” he said. “People in Hong Kong are really opposed to cross-border law enforcement, and they are beginning to wonder if the one country, two systems policy even exists any more.”

Reported by Ho Shan and Gok Man-fung for RFA’s Cantonese Service, and by Wu Jing for the Mandarin Service. Translated and written in English by Luisetta Mudie.