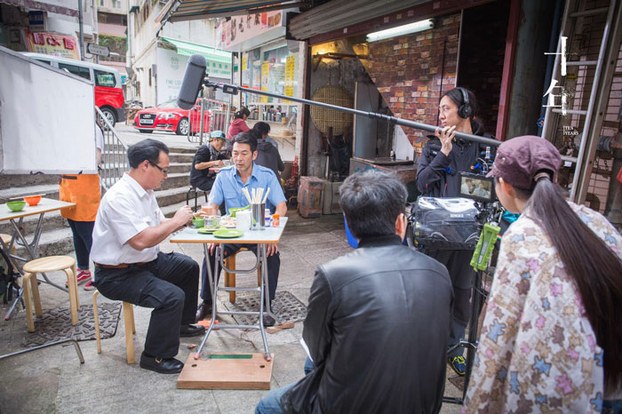 An undated publicity shot shows cast and crew during the making of the Hong Kong independent movie “10 Years.” Jevons Au

As Hong Kong struggles to maintain existing freedoms of expression in the face of growing pressure from Beijing, movie houses in the former British colony have mysteriously dropped an independent film depicting a dystopian future for the semiautonomous city in spite of massive success at the box office.

While the smash-hit, sociopolitical satire “10 Years” which depicts a version of Hong Kong in a decade’s time, beat “Star Wars: The Force Awakens” as the top box-office draw in some of the city’s cinemas since its release eight weeks ago, movie patrons are hard-pressed to find it now.

Co-director Jevons Au told RFA he is angry and disappointed that the movie has disappeared from cinemas, in spite of selling five million tickets since its release amid rave reviews and a continuing public debate, both on and offline.

“Maybe it’s because they are afraid,” Au said of the cinema operators. “Maybe they see that other cinema chains aren’t showing it, so they stop showing it, too.”

He added: “Or maybe they’re afraid that if they keep showing it, Beijing will be unhappy and actually ban it. I am wondering now what freedom of expression even means today.”

While the film is a hit with Hong Kong’s movie fans, it was panned by news outlets with ties to the ruling Chinese Communist Party. The Global Times criticized it for dealing with “sensitive” ideas that come too close to notions of independence for Beijing’s taste.

According to a Jan. 22 editorial in the paper, the film is likely to bring “more harm than benefits” to Hong Kong.

“Its box office sales … show that it has only influenced a small number of Hong Kong people,” the paper wrote, citing only three million in  ticket sales. “It is to be hoped that the Hong Kong people will have some immunity to this thought virus, and are unlikely to follow it into the gutter, once all the fuss is over.”

The movie depicts an era in which hardly anyone speaks Cantonese, Hong Kong’s lingua franca, and Communist-inspired “Youth Guards” patrol the streets to ensure nobody steps out of line or uses unauthorized words like “local.”

Fellow director Chow Kwun-wai said the fim contains no graphic images of self-immolation, a form of protest which has been used by more than 100 Tibetans since February 2009 to protest Chinese rule in Tibetan areas and call for the return of exiled spiritual leader the Dalai Lama.

Chow said he was aiming to make a work of art that also told the truth.

Chow continued: “I don’t think it’s too much exaggeration to say that we wanted to make a moral statement, because, as a line of dialogue in the film says, politics is morality.”

According to Au, they used the Cantonese language in the film as a bellwether for the health of Hong Kong’s political identity and traditional freedoms that are crucial to the film’s plot.

He said the outline for the film was penned in 2009, as he was considering what possible futures could await Hong Kong in the face of Beijing’s reluctance to countenance fully democratic elections, and the Chinese government’s bid to extend its own form of “patriotic education” into Hong Kong’s schools.

Au said Beijing seems to confuse independent thought from Hong Kong’s people with a drive towards literal independence from China. which promised Hong Kong was promised the city a high degree of autonomy in the 1997 handover from British rule.

The film was released just as Beijing stepped up its efforts to promote “patriotic education” in schools across the country, as well as in Hong Kong, Taiwan and Macau, and also to Chinese students studying in overseas universities.

A recent document released by the ministry of education in Beijing has called for better patriotic education in schools in the three territories, in spite of the fact that Taiwan has been governed separately from the mainland since 1949.

Stronger ties should be built between schools in the mainland and “sister schools” in those regions, to promote the use of Mandarin, particularly in Hong Kong and Macau, which returned to Chinese rule in 1999, it said.

Hong Kong political commentator Camoes Tam said the directive is in breach of the “one country, two systems” concept under which the former colonies were handed back to Beijing.

“Education in Hong Kong, Macau and Taiwan can’t be governed by Beijing, and if they start interfering in it, they will be in breach of the Basic Law,” Tam said in a reference to the mini-constitutions of post-handover Hong Kong and Macau.

“It seems things are going back to 2007 in Hong Kong, when [then] President Hu Jintao said that to be patriotic was the same thing as loving the Chinese Communist Party,” he said.

“This caused a lot of protest among Hong Kong people,” he added. “Now they are using these tactics to try to bring it back, because they see the anti-patriotic education protests and the Occupy Central pro democracy movement [of 2014] as misbehavior [on the part of Hong Kong’s citizens.]”

Reported by Hai Nan for RFA’s Cantonese Service, and by Yang Fan for the Mandarin Service. Translated and written in English by Luisetta Mudie.