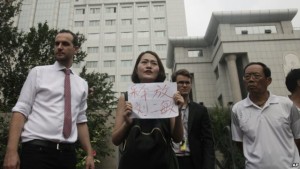 Li Wenzu, center, wife of imprisoned lawyer Wang Quanzhang, holds a paper that reads “Release Liu Ermin” as she and supporters of a prominent Chinese human rights lawyer and activists stage a protest outside the Tianjin No. 2 Intermediate People’s Court in Tianjin, China on Aug. 1, 2016.

TIANJIN—Around two dozen supporters of a prominent Chinese human rights lawyer and three activists charged with subversion protested outside a northern city court Monday amid widespread concerns that authorities were holding their trials in secret.

Flanked by Western diplomats, the supporters gathered outside the Tianjin No. 2 Intermediate People’s Court calling for information to be disclosed about the four, whose mid-July indictments were the latest move by authorities waging a massive crackdown on legal activism over the past year.

Supporters included the wife of Gou Hongguo, one of the activists who was indicted with subversion and thought to be standing trial Monday, together with Zhou Shifeng, the head of a law firm at the center of the crackdown.

Several hundred people nationwide have been questioned, with some of them detained and arrested, in the crackdown begun in July last year that has sent a chill through China’s legal system. Nearly two dozen of them remain in detention and face charges, the most serious of which includes subversion of state power, a charge that carries a maximum penalty of life imprisonment.

An overseas Chinese news site and activist groups that track the prosecutions of Chinese rights activists had reported rumors that Zhou, Gou and two others might be put on trial on Monday. Court officials reached by phone said they had no information on the cases.

There were no visible signs of a trial in progress aside from the heavy presence of plainclothes security officers outside the courthouse. Wives of lawyers and activists who have been ensnared in the crackdown staged a small demonstration next to diplomats from the United States, Britain and six other Western countries that have publicly denounced Beijing’s crackdown.

Fan Lili, the wife of Gou, the activist, fell to the ground in tears following a confrontation with a plainclothes police officer while dozens of security agents who blanketed the street watched, filming with smartphones and video cameras.

“My son is 16 months old now and he has never even met his father. How can you be like this? Let him come home,” Fan said. “All I’m here for today is to ask whether they are holding his hearing and why did they beat me?” 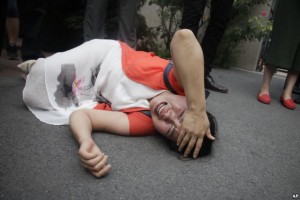 Fan Lili, the wife of imprisoned activist Gou Hongguo, lies on the ground in tears following an interaction with a plainclothed police officer outside the Tianjin No. 2 Intermediate People’s Court in Tianjin, China on Aug. 1, 2016.

Local officials later persuaded the family members, supporters and diplomats to move from the courthouse gate.

Family members say they have not been permitted to visit the jailed lawyers and activists since they were taken away more than a year ago. Chinese authorities, they say, have also refused to identify the legal counsel they have appointed to represent the defendants instead of the lawyers appointed by their families.

Chen Guiqin, a professor from central Hunan province and the wife of detained lawyer Xie Yang, traveled seven hours by train hoping to get a sense of what she could expect for her husband when he goes on trial as expected.

Jiang Tianyong, a Beijing-based human rights lawyer, said the level of secrecy was rarely seen. In the past, high-profile dissidents such as the writer Liu Xiaobo had family-appointed lawyers and relatives present at his trial. Jiang said that the disappearances, presumably into police custody, of at least two of the would-be defendants’ wives as they were headed to Tianjin on Sunday were strong indications that a trial was under way.

“This is unprecedented…a completely secret operation,” said Jiang. “From beginning to end, it’s a black box.”