And that is what he did during his five-day visit, which took him to Beijing, Shanghai and Xi’an and ends late on Thursday, according to his spokeswoman, Ferdos Forudastan.

“In his political discussions, he talked about several people who are in prison,” Ms. Forudastan said, adding that the only name she could disclose was that of the journalist Gao Yu, who wrote for the German state broadcaster Deutsche Welle and was imprisoned last year on charges of revealing state secrets, but then released on medical parole after an international outcry. 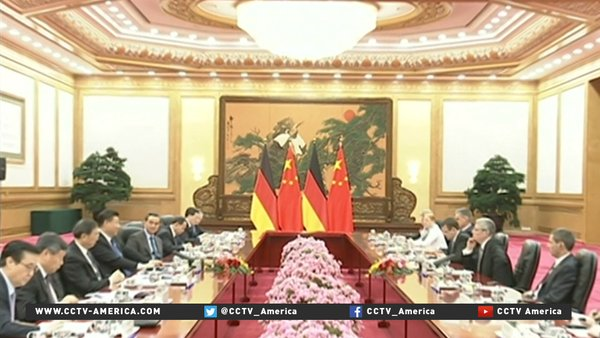 By raising the cases of political prisoners, Mr. Gauck, a former Lutheran pastor and civil society activist in East Germany who opposed the Communist state, stands out among foreign leaders who have tended to avoid human rights issues, chasing trade instead, said Tienchi Martin-Liao, the president of the Independent Chinese PEN Center, who is based in Germany.

“As a German citizen I’m very happy that they did it,” said Ms. Martin-Liao, who was born in China. “He’s doing what he’s supposed to do: to speak about values and moral questions.”

More a ceremonial head of state than a political figure in Germany, “he’s not a normal politician,” she said. “He’s not afraid of not being elected. He’s very brave on many things.”

She compared Mr. Gauck’s approach with those of leaders from Britain and France, who she said were far less forthright about China’s human rights record, which recently came under heavy criticism at the United Nations.

By contrast, Germany, with its history of fascism and Communism, “feels it has special responsibility not to separate morality from actions,” Ms. Martin-Liao said.

One of the six people on the list given to Mr. Gauck was Liu Xiaobo, the imprisoned Nobel Peace laureate, Ms. Martin-Liao said.

The others were Ms. Gao; the writer and photographer Liu Xia, who is under house arrest and is married to Mr. Liu; the imprisoned poet Li Bifeng; the imprisoned scholar Ilham Tohti; and Qin Yongmin, the founder of a pro-democracy party who has disappeared.

On Monday evening at the German Embassy, Mr. Gauck also met with some of China’s beleaguered human rights lawyers, including Mo Shaoping and Shang Baojun, who represent Ms. Gao. More than 200 rights lawyers or legal workers were swept up in detentions last summer, with about two dozen still in custody.

Ms. Gao has received a visa to travel to Germany for medical treatment but cannot leave China because the Public Security Ministry will not permit her exit, Ms. Martin-Liao said.

Perhaps most markedly, at Tongji University in Shanghai on Wednesday, Mr. Gauck delivered a blistering, if coded, speech, in which he criticized repressive political states and called for civil society to be allowed to flourish.

The German newspaper Die Welt reported that “in a clever speech, the president held up a mirror to Chinese politics.” By referring extensively to Germany’s experiences of Nazism and East German Communism, Mr. Gauck drew parallels with China today that resonated, the article said.

Mr. Gauck told an audience of students and teachers that he came from a country “that has faced some of the same problems that China has to confront.”

East Germany “silenced its own people, locked them up and humiliated those who refused to comply with the will of the leaders,” he said. “And the entire system lacked proper legitimacy. Free, equal and secret public elections were not held. The result was a lack of credibility, which went hand in hand with a culture of distrust between the rulers and those they ruled.”

He criticized some countries’ insistence that they were unique and therefore beyond others’ judgment, an idea that Chinese leaders frequently put forward.

“For a long time, Germany claimed special cultural status — a sort of exceptionalism — according to which what was right for everyone needn’t necessarily apply to Germany. Ultimately, it took the cataclysm of Nazism and its defeat in the Second World War to make the Federal Republic of Germany open itself up to the basic principles” of Enlightenment philosophy, Mr. Gauck said: “inalienable human rights and the rule of law, separation of powers, representative democracy and popular sovereignty.”

He added, in another apparent reference to China today: “That moment made it clear that the human yearning for freedom cannot be kept down. That’s why individual liberties cannot be replaced by material goods or social status in the long term.”

Hua Chunying, a spokeswoman for the Chinese Ministry of Foreign Affairs, played down Mr. Gauck’s speech.

“As long as the two countries strengthen dialogue while respecting and treating each other equally, China and Germany can boost mutual trust and cooperation,” Ms. Hua said at a regular news briefing.

And Xinhua, the state news agency, avoided addressing the remarks, noting that Mr. Gauck had expressed optimism over Chinese-German cooperation.

On Tuesday, the day after Mr. Gauck met with rights lawyers, Global Times, a nationalist newspaper, appeared to try to warn Mr. Gauck off the topic with an editorial headlined: “Human rights not priority for Gauck visit.” 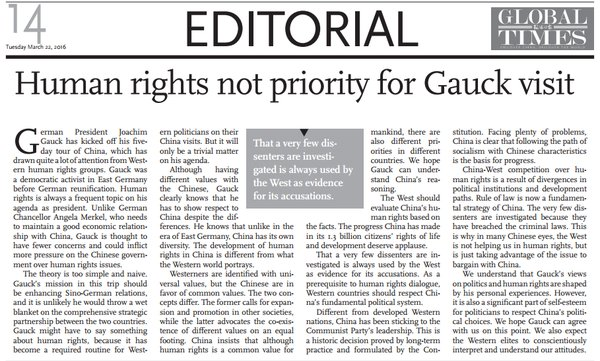 “Unlike German Chancellor Angela Merkel, who needs to maintain a good economic relationship with China, Gauck is thought to have fewer concerns and could inflict more pressure on the Chinese government over human rights issues,” the newspaper wrote.

It added, “Gauck might have to say something about human rights, because it has become a required routine for Western politicians on their China visits. But it will only be a trivial matter on his agenda.”

Mr. Liao, the exiled writer, said that he did not know exactly what Mr. Gauck said to Chinese leaders but that he was confident the visit would help China’s struggling civil society and human rights advocates.

“It will per se have a deep and far-reaching influence on China’s dissident intellectual community and on the people,” he wrote in an email.