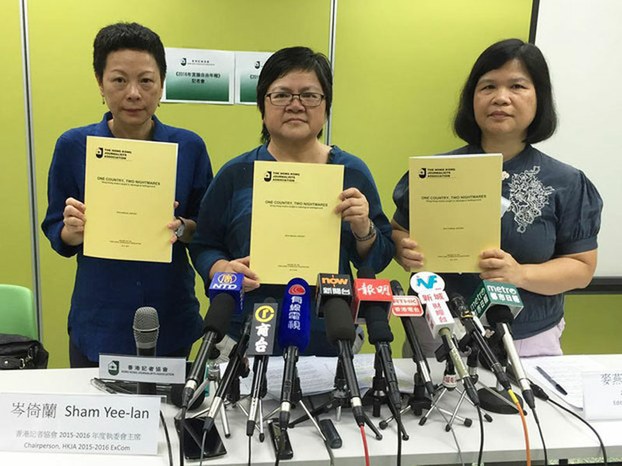 Journalists in Hong Kong have called on the city’s government to do much more to protect press freedom, citing a “grave threat” to its traditional freedoms of expression and association.

In a report titled “One Country, Two Nightmares,” the Hong Kong Journalists’ Association (HKJA) said the city’s government should take a “much more robust approach towards the protection of press freedom and other rights integral to Hong Kong’s success.”

Under the terms of its 1997 handover to China, Hong Kong was promised the continuation of its existing status as a separate legal jurisdiction for 50 years, as enshrined in a 1984 Sino-British treaty and the city’s mini-constitution, the Basic Law.

“[The government] should in particular take a strong approach to protect the one country, two systems principle given that one country is now becoming more prominent, thereby posing a grave threat to the … high degree of autonomy as promised in the Basic Law,” the group said in a statement on its website.

It called on the administration of chief executive Leung Chun-ying to ensure that journalists are able to carry out legitimate reporting duties, especially during protests.

Online and student journalists should be given equal access to government information, it said.

“It should also … enacct freedom of information and archive laws to ensure that Hong Kong residents, including journalists, have proper access to government information and documents; and adopt an open way of dealing with the media by holding more press conferences,” the group said.

It said Hong Kong’s “nightmare” referred to incursions by the ruling Chinese Communist Party into Hong Kong’s internal affairs, in an apparent reference to the detention of five booksellers for selling “banned books” to customers across the internal immigration border in mainland China.

“This incident brought up questions about the viability of one country, two systems in the context of the Beijing leadership’s desire to eliminate opposition voices,” the HKJA said.

The report also cited a landmark court case over a bid by the University of Hong Kong to gag media coverage of its council meetings, continued cases of violence against journalists, in particular during the Mong Kok unrest of February 2016 and concerns about the licensing system for radio and television broadcasters.

HKJA chairwoman Sham Yee-lan told local media that Leung and his second-in-command Carrie Lam had ignored the gradual erosion of the city’s freedoms for far too long.

“The list of cases of damage to [our freedoms] is already too long to enumerate,” Sham told a political forum at the weekend. “All indicators of press freedom, whether done here or by overseas groups like the index of press freedom published by Reporters Without Border (RSF), show that serious damage has been done.”

“This is so ridiculous that it hardly needs me to explain it,” Mak said. “China has never published a list of forbidden books.”

“And how do acts carried out by Hong Kong residents in Hong Kong suddenly become subject to Chinese law when they cross the border into [neighboring] Shenzhen?” she said.

As tens of thousands of people took to the streets of Hong Kong on Friday to call for the resignation of the city’s chief executive Leung Chun-ying, one of the five booksellers detained last year by China, Lam Wing-kei, withdrew from the demonstration, citing fears for his personal safety.

“If someone cannot even take part in a march, then maybe we are not so safe,” Lau told government broadcaster RTHK.

To Yiu-ming, assistant professor of journalism at Hong Kong’s Baptist University, said the now-shuttered Causeway Bay Books was an emblem of the city’s once freewheeling freedoms of press and publication.

“Of course [Beijing] is saying that it’s a matter for their domestic law enforcement, but the whole saga is riddled with dodgy methods, including the detention of [publisher] Gui Minhai from Thailand and the detention of Lee Bo in Hong Kong,” To said. “They seem to do whatever they like.”

He warned that the Causeway Bay Books incident could just be the start of a crackdown on Hong Kong’s press and publishing industry.

“Today, it’s Causeway Bay Books; tomorrow, it could be another bookstore or publishing house, that’s quite likely,” he said. “If there are no restraints, then people will worry that one country will always trump two systems.”

“There will be no guarantee of Hong Kong’s rights.”

Reported by Lau Siu-fung for RFA’s Cantonese Service, and by Kou Tianli for the Mandarin Service. Translated and written in English by Luisetta Mudie.