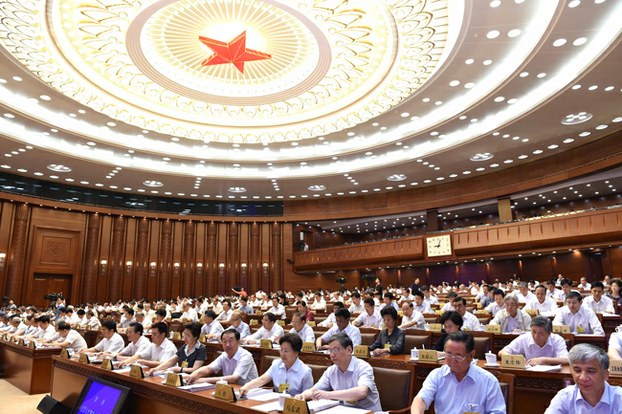 Authorities in the eastern Chinese province of Jiangxi have detained an activist who tried to run as an independent candidate in elections to his local People’s Congress.

Yang Wei, also known as Yang Tingjian, was detained by police in Jiangxi’s Zixi county after he tried to fill out an application for candidacy in forthcoming elections to his local legislative body in Hecheng township, his father told RFA.

He said Yang Wei’s bid for candidacy was initially blocked by the township government, so he tried to submit it at the county level.

“He went to the township to pick up a form to register his candidacy, but they refused to give him one,” Yang Wei’s father said. “They summoned him to the police station at about 4 p.m. on Tuesday, and then they took him to the detention center at around midnight.”

“We received notification at around 9 a.m. today that he is being held for 10 days’ administrative detention,” he said.

Administrative sentences of up to 10 days can be handed down by police to perceived “troublemakers” without the need for a trial.

The ruling Chinese Communist Party has warned that there is “no such thing” as an independent candidate in elections, and that anyone hoping to stand for elections this year to the People’s Congress will first have to clear “due legal procedures.”

This means candidates must be approved by local party officials who usually ensure that anyone lacking their support doesn’t win, often by tampering with physical ballot boxes, paying for extra votes, or simply by having those who try to run detained.

China will “elect” more than 2 million lawmakers at the county and township levels across the country to local-level People’s Congresses in more than 2,000 counties and 30,000 townships over the next few months.

Opposition parties are banned in China, with the exception of a token group of “democratic parties” which never oppose or criticize the government. Anyone trying to set one up is likely to face a lengthy jail term.

Yang said his son had been under round-the-clock surveillance since he tried to register for the poll.

“Officials from the township government had been monitoring and following him 24 hours a day for the past few days,” he said. “He had wanted to stand in the township People’s Congress elections.”

“I think they were trying to provoke him, to pressure him into losing his cool, so that they could arrest him,” Yang said. “They really didn’t want Yang Wei to run in the elections.”

Gansu-based rights activist Qu Mingxue said he had been formally arrested on suspicion of “disrupting the process of an election” after he tried to stand in June elections to the Yongjing county People’s Congress, although the case against him was later dropped and he was released.

“[Yang Wei] is an admirable young man who voiced the aspirations of young Chinese people for democracy and freedom,” Qu said.

“He went to collect an election registration form … and got into a dispute with them, and they put him under 10 days’ administrative detention,” he said.

Qu said Chinese citizens have the right to stand as candidates in elections under the country’s constitution.

In 1998, Yao became the first independent delegate to be elected to a municipal seat in a local People’s Congress, campaigning for poverty alleviation and the rights of local people. However, he was shunted aside five years later and has been harassed ever since.

This entry was posted in Headlines and tagged Congress, detention, election, Jiangxi. Bookmark the permalink.