Posted on 10/04/2016 by editor | Joanne Leedom-Ackerman: Building Literary Bridges: Past and Present已关闭评论

Gathered in the ancient city of Ourense, Spain in the heart of Galicia, writers from around the world celebrated history, debated the present and committed to the future of literature and freedom of expression at PEN International’s 82nd Congress organized around the theme “Building Literary Bridges.” 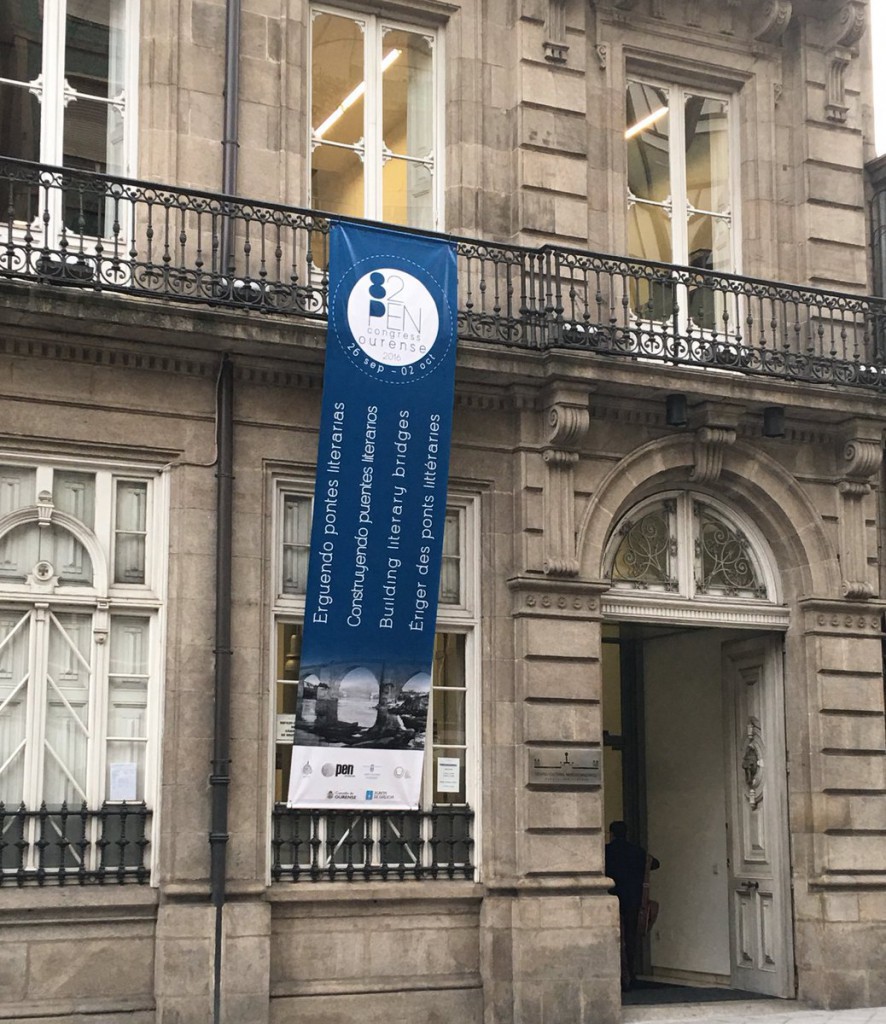 Two hundred poets, novelists, dramatists and nonfiction writers from approximately 75 centers of PEN agreed to embark on a three-year global campaign to increase opportunities for displaced writers worldwide. Responding to the unprecedented flow of refugees, migrants, and displaced, all of which include writers and those whose stories need to be told, the 95-year old literary organization will undertake an initiative to put storytelling and literature at the center of an effort to heal and expand opportunities. Through its 145 centers, PEN will develop programs that will include residencies, workshops, mentoring, education and publications. The full scope of the campaign will be announced December 10, Human Rights Day.

Founded in 1921 out of the chaos and refugee flows after World War I, PEN anticipated and protested the suppression of freedom of expression in Nazi Germany prior to World War II and defended writers throughout Europe during the war, offering haven and setting up PEN centers in exile.

“PEN responds to the crises of our times,” said PEN International President Jennifer Clement. “We are writers. We believe in imagination.”

The 82nd Congress began with heartening and dispiriting news. Iranian-Canadian writer Homa Hoodfar was released from Iran’s Evin prison at the same time news arrived that Jordanian columnist Nahed Hattar had been gunned down outside court by a fundamentalist who claimed Nahed deserved to die for his ideas.

This pattern of good and terrible news also emerged in the past year with early releases of imprisoned writers in Tibet, Kazakhstan, Azerbaijan, Vietnam, Qatar and Colombia at the same time the situation deteriorated with more arrests and killings in Bangladesh, China, Turkey, Ukraine and other countries.

The tradition of an Empty Chair at the PEN Congress sessions highlighted the cases of imprisoned Egyptian novelist Ahmed Naji, Kurdish journalist Asli Erdogan, Palestinian poet Dareen Tatour, and Gui Minhai, a bookseller in Hong Kong, who was kidnapped by the Chinese government while he was in Thailand.

Gui’s daughter, a Swedish citizen as is he, sent a letter to the Congress: “In the end, this is not about my father as an individual…. This is about China actively extending its control far beyond its own borders. This is about China kidnapping and illegally detaining more and more people because of their political beliefs. It’s about European citizens no longer being able to know that their human rights will be protected.”

Discussing “Literature as a Tool for Empowerment,” delegates shared ongoing projects, including working with young writers in schools and in prisons. Lebanon PEN Center’s delegate noted, “I discovered the tremendous effect from creative writing to express trauma and help people tell their stories. We have 1.3 million Syrians in Lebanon. We have a big responsibility. We see the empowerment of civil society through literature.”

In Mali and Sierra Leone, the PEN centers work with students and young people in post-conflict situations.  The Mali delegate spoke about workshops with Tuareg warriors who had fought on the battlefield in the Sahara. When they returned home, they had lost their dignity and positions and were migrants so they went to join the ranks of Gadhafi. After Gadhafi was toppled, there was a big problem, he said, and conflict. The Mali PEN Center helped organize writing workshops which led to publishing books. Hundreds attended these workshops and were able to tell their stories and see them published.

PEN’s earliest work to protect writers began when poet Federico Garcia Lorca was arrested at the beginning of the Spanish Civil War in 1936. PEN President H.G. Wells sent a telegram protesting, but it arrived too late and Lorca was executed. At the 82nd PEN Congress, Lorca’s niece Laura opened the Assembly with Lorca’s poem Sonnet:

I know that my profile will be serene
In the north of an unreflecting sky.
Mercury of vigil, chaste mirror
to break the pulse of my style.

For if ivy and the cool of linen
are the norm of the body I leave behind,
my profile in the sand will be the old
unblushing silence of a crocodile.

And though my tongue of frozen doves
will never taste of flame,
only of empty broom,

I’ll be a free sign of oppressed norms
on the neck of the stiff branch
and in an ache of dahlias without end.
–Federico Garcia Lorca