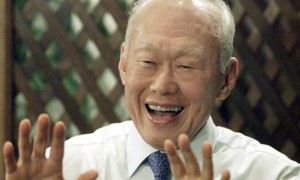 The founding prime minister of an independent Singapore, he sought to encourage prosperity through ensuring a dominant role for the state

As first prime minister of Singapore, serving for three decades until 1990, and a continuing cabinet presence for the two that followed, Lee Kuan Yew, who has died aged 91, was a man whose story reflected his times. A relentless nation-builder like Tito, an instantly identifiable symbol like Haile Selassie, Lee also had a third dimension, especially in western eyes – statesman, philosopher king, embodiment of the wisdom of the east.

Lee’s role in and articulation of events from the Pacific war and the Japanese occupation of Singapore till leaving politics completely in 2011 made him a pivotal figure of the modern world. To many he became the embodiment of the orderly transition of a region from western dominance to neo-Confucian success. Yet experience had taught him to be a pessimist, which drove him to work harder, to be more ruthless.

Lee himself may not have changed the world outside little Singapore very much. Indeed, his greatest apparent achievement, the creation of a viable independent state, was the outcome of his biggest failure – Singapore’s expulsion from the Federation of Malaysia in 1965, two years after the organisation’s inception. His first vision of Singapore’s future, as part of a multicultural Malaysia, may prove in time to have been the correct one, but he can be at least partly judged by the achievement of his second vision for Singapore, the prosperous, prickly and obsessively hygienic city state.

He did not create modern Singapore’s prosperity. The city state thrived naturally in a region of economic growth and rapid development of world trade. However, he certainly created the image of the state in his own likeness.

Being liked was not part of his agenda. A combination of high intelligence and unswervable determination were Lee’s characteristics, and he transferred them, at least superficially, to modern Singapore. Without him, it may in time go a different way, more reflective of its multiracial background and potentially precarious existence. But while he was alive few dared think, let alone put forward, alternative visions.

This entry was posted in Headlines and tagged Lee Kuan Yew, Singapore. Bookmark the permalink.