Ma Jian: Tiananmen Square 25 years on: ‘Every person in the crowd was a victim of the massacre’

In June 1989, the novelist Ma Jian was among the million freedom protesters who gathered in Tiananmen Square. The brutal response shocked the world and crushed the Democracy Movement. But, he says, its spirit and aspirations live on
The Guardian, Sunday 1 June 2014 12.59 EDT 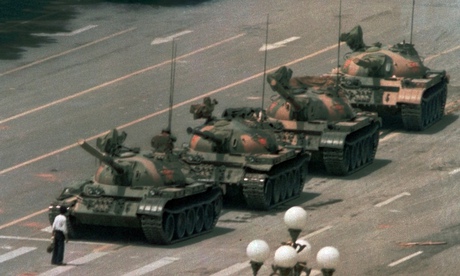 Symbol of defiance … a man blocks a line of tanks in Tiananmen square. Photograph: Jeff Widener

On 4 June 1989, when the Chinese Communist party (CCP) sent 200,000 soldiers in armoured tanks to suppress the peaceful pro-democracy protest in Beijing’s Tiananmen Square, causing hundreds if not thousands of fatalities, it was unimaginable to me and most of my compatriots that, 25 years later, this barbaric regime would still be in power, and the massacre would be rendered a taboo. But despite the party’s most ardent efforts to wipe the episode from history, memories of the massacre refuse to be crushed. On the milestone 25th anniversary, Tiananmen is more important than ever.

The death toll of the Tiananmen Democracy Movement may pale in comparison with the millions who perished in the Great Leap Forward or the Cultural Revolution. Its significance, however, lies not in the number of casualties but in the nobility of its aspirations and the power of its legacy. The CCP and its western apologists like to claim that China, with its vast population, long, unbroken history and cultural traditions, has no desire – or indeed need – for constitutional democracy, and is much better off following its own “exceptional” path of political dictatorship combined with a market economy. But Tiananmen showed the world that the Chinese people are no different from everyone else. When given the chance to express their views freely, they seized it and howled in unison their desire for democracy, freedom and human rights. Although their understanding of the concepts was elementary, they instinctively grasped, like the protesters in Place de la Bastille and Wenceslas Square before them, that these ideals formed the foundation of any civilised and humane nation. To claim that the Chinese are unsuited to, or not yet ready for, democracy and freedom is to view them as less than human beings. 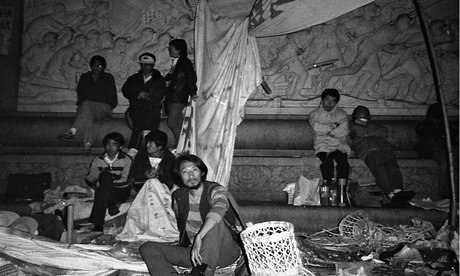 Ma Jian in Tiananmen Square, May 1989. Photograph: Ma Jian
The party leadership insists that it has reached a “clear conclusion” on Tiananmen: it was a counter-revolutionary riot, involving a tiny minority of troublemakers, which needed to be crushed to ensure China’s future economic development. This conclusion is clear, but incorrect. The democracy protests were neither “counter-revolutionary” nor a “riot”. They were a spontaneous mass uprising, a jubilant national awakening, in which millions of students, workers and professionals gathered peacefully in public squares around the country for weeks on end to call for rights guaranteed to them by the constitution: freedom of speech, of the press and of assembly and freedom to elect their leaders – basic liberties that the west takes for granted. They were among the most orderly, restrained and self-disciplined protests the world has seen. Student marshals maintained crowd control; armies of volunteers distributed food and drink and provided free medical care. In the madness of 20th-century China, the Tiananmen protests were a moment of sublime sanity, when the individual emerged from the somnolent collective and found their true voice.

In this atmosphere of freedom, people used their innate creativity and intelligence to challenge and question state power. Teenagers strummed Bob Dylan ballads around campfires and danced in the dark. The Beijing Symphony Orchestra brought its instruments to the square and gave an impromptu performance of Beethoven’s Ode to Joy. Art students erected a replica of the Statue of Liberty right opposite the huge portrait of Chairman Mao on the square’s northern edge. The student leader, Wu’er Kaixi, rebuked Premier Li Peng on national TV, dressed in striped pyjamas. In a makeshift Democracy University, professors gave seminars on Thomas Paine and the French revolution. When the government rejected pleas for dialogue, hundreds of students tied white bandanas around their heads and went on hunger strike. On 3 June, Liu Xiaobo, then a lecturer at the Beijing Normal University, staged his own hunger strike on the square with the economist Zhou Duo, the rock star Hou Dejian and party member Gao Xin, to protest against martial law and call for a peaceful transition to democracy. 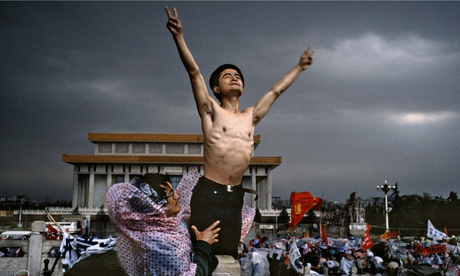 ‘A moment of sublime sanity’ … a hunger protester at Tiananmen. Photograph: Stuart Franklin/Magnum
Tiananmen revealed the true face not only of the Chinese people, but of the CCP as well, which was exposed as a regime prepared to massacre its own unarmed citizens in order to maintain its power. It is both mistaken and morally repugnant to argue that the deaths were necessary to “re-establish order” and guarantee future growth. Taiwan is clear proof that the Chinese can successfully combine democracy with capitalism. China’s rapid economic rise over the past 25 years is thanks in most part not to the Communist party but to non-unionised Chinese workers prepared to labour in poor conditions for low wages. An accountable, democratic government would have no doubt achieved a less frenzied, more sustainable economic rise, with less corruption and environmental devastation.

Until now, the only apparent victor of Tiananmen has been the CCP. The massacre destroyed its moral legitimacy, but like a resilient virus, it has mutated in unforeseen ways to ensure its survival. Under the slogan of authoritarian capitalism, it has filled the bellies of the Chinese people while shackling their minds; encouraged a lust for material wealth while stifling the desire to reflect on the past and ask questions about the present. But the party’s victory is a hollow one. Its near psychotic repression of any mention of Tiananmen reveals its guilt for past bloodshed and terror of the truth.

Meanwhile the list of victims of Tiananmen continues to grow. Wu’er Kaixi and other student leaders still live in exile. Liu Xiaobo, despite winning the Nobel peace prize in 2010, is serving an 11-year prison sentence for state subversion, while his wife Liu Xia is under house arrest. Ahead of each anniversary of the massacre, activists are routinely rounded up, but this year the crackdown on dissent has been fiercer than ever. On 24 April, a 70-year-old journalist, Gao Yu, was arrested, together with her son and four cats, for disclosing a party memorandum that listed seven “unmentionable topics” the press were told to avoid, including universal values, press freedom, citizens’ rights and the party’s historical aberrations. She is now criminally detained and her son is missing. On 3 May, a seminar was held by 15 intellectuals in a private home in Beijing to commemorate the 25th anniversary of the massacre. Three days later, five of the 15 who attended, including the prominent rights lawyer Pu Zhiqiang and the scholar Xu Youyu, both of whom have serious medical conditions, were criminally detained for “picking quarrels and provoking troubles”. Public discussion of Tiananmen has never been tolerated, but now even private commemoration is outlawed. 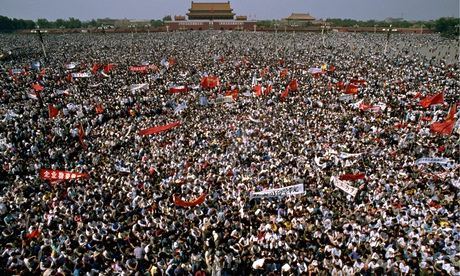 A sea of student protesters gather in Tiananmen square, 4 May 1989. Photograph: Peter Turnley
Five years ago, I met the artist Chen Guang in his Beijing flat, and he talked to me about the trauma he suffered as a young PLA soldier in 1989 when his unit was ordered to expel the students from the square with assault rifles and bayonets, then later burn the tents, journals, clothes and banners flattened by the tanks. Before the 20th anniversary of the massacre, he was able to exhibit on his website – for the few days before censors closed it down – paintings inspired by photographs he had taken of soldiers and tanks on the square. This year he has not been so lucky. On 29 April, in front of a few friends in the Songzhuang artists’ village, he donned a face mask and hurled whitewash over the dates 1989 and 2014 painted on a brick wall. A week later he was placed in detention. Three years ago, the artist Hua Yong went to the square, punched himself in the nose and with the blood that poured from it wrote on a concrete paving stone the numbers six and four, the common shorthand for 4 June. Plainclothes police dragged him away immediately. Two years ago, Hua Yong returned to the square, cut his finger and with the blood wrote six and four on his forehead. He was arrested and sent to a labour camp for 15 months.

These civil rights activists, lawyers, journalists and artists are the finest legacy and true victors of the Tiananmen Movement. Although they form a tiny minority in a country of 1.3 billion people, they are its greatest hope. By fighting peacefully for constitutional rights and refusing to forget the tragedies of the past, they show the way to a better future. Their courage is slowly shaking young Chinese from their political apathy. Since Pu Zhiqiang’s arrest, China’s internet has been ablaze with coded messages of support. 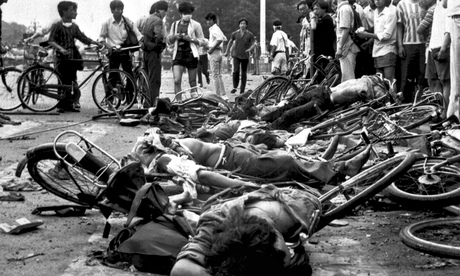 Victims of the massacre. Photograph: AP
My most vivid memory of the Tiananmen days is the time I stood high on the Monument to the People’s Heroes one afternoon in late May and looked down on a crowd of more than a million people assembled in the square. Every face beamed with hope and joy. The colourful swathe of humanity looked as peaceful as a meadow of wildflowers. There was a euphoric sense that after decades of tyranny, the Chinese people had found the courage to take full control of their lives and attempt to change the fate of their nation. Every person in that crowd was later a victim of the massacre, whether they lost their life on 4 June or survived, their ideals shattered and their soul scarred by fear.

Tiananmen was a defining moment for my generation. More recently it has changed my life once again: since the Chinese edition of my Tiananmen novel, Beijing Coma, was published in Taiwan three years ago, the authorities have banned me from returning to the mainland. On 3 June this year, I will attend a Tiananmen seminar in Sweden and place an empty chair where the journalist Gao Yu would have sat. On 4 June, back in London, I will phone my friend, the economist Zhou Duo, who as usual will be marking the day with a private hunger strike in his Beijing home. I will light candles in honour of those who died in the massacre and the Chinese dissidents who are in jail or under house arrest. I will think of the vast, jubilant crowds that filled the square in 1989 and remind myself that the values they espoused are universal, and mightier than the tyranny that still strives to suppress them. Then I will hope that before another 25 years pass, the mausoleum and portrait of the mass murderer Mao will have been removed for ever from Tiananmen Square and replaced by a Monument to the Heroes of 1989, and that the Chinese people will be free to assemble there, punch themselves in the nose if they wish, mourn all the victims of past tragedies, discuss liberty and democracy, and sing their odes to joy.