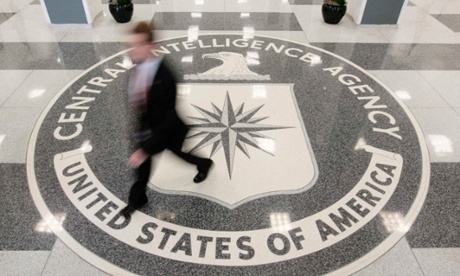 Tweets were an apparent attempt to remind the Twitterverse that behind the agency’s new social-media facade lies a controversial history. Photo: Larry Downing /Reuters
On Friday, the CIA officially joined Twitter. Somewhat against the generally accepted nature of the agency, its first tweet was coyly playful, saying: “We can neither confirm nor deny that this is our first tweet.”

Not everyone, however, was laughing.

Later the same day, through its own Twitter account, the New York Review of Books released a barrage of 140-character reminders of the surveillance agency’s controversial interrogation techniques.

An hour after releasing a tweet about the obscure delights of Italian Futurist art, the august and famously technophobic literary journal – which has on prominent display in its West Village offices a book entitled “Social Media is Bullshit” – tweeted a link to a blogpost written by David Cole in March, amid Senate intelligence committee chair Diane Feinstein’s public falling out with the CIA over the “internal Panetta review”.

— NY Review of Books (@nybooks) June 6, 2014
In the blogpost, Cole, a professor at Georgetown University Law Center, concludes: “The CIA’s desperate efforts to hide the details of what the world already knows in general outline – that it subjected human beings to brutal treatment to which no human being should ever be subjected – are only the latest evidence of the poisonous consequences of a program euphemistically called ‘enhanced interrogation’.”

In rapid succession, the account tweeted out the contents page of a confidential 2007 report by the International Committee of the Red Cross, entitled “Report on the Treatment of Fourteen ‘High Value Detainees’ in CIA Custody”.

The contents page, which documented interrogation tactics used at the CIA’s secret offshore prisons known as “black sites”, was published in a 2009 NYRB article by Mark Danner, US Torture: Voices from the Black Sites.

— NY Review of Books (@nybooks) June 6, 2014
The 10-tweet blast was an apparent attempt to remind the Twitterverse that behind the agency’s new social-media facade – and indeed the “kids page” of its website – lies a somewhat controversial history.

As of Saturday afternoon, @CIA had not responded to @nybooks. It had, however, released a second tweet, which said:

This entry was posted in Culture and tagged CIA, Twitter. Bookmark the permalink.