Primark investigates claim of ‘cry for help’ note in trousers 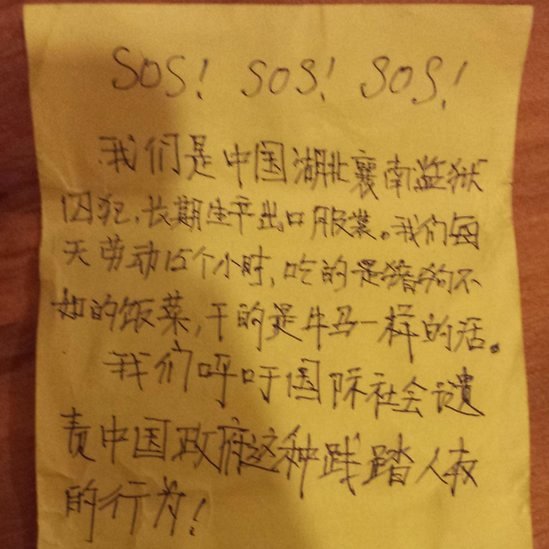 A shopper has claimed she found a “cry for help” note hidden inside a pair of trousers alleging slave labour conditions in a Chinese prison.

The note, wrapped in a prison identity card, claimed inmates were forced to work 15 hours a day making clothes.

Karen Wisínska said she bought the trousers in Primark’s Belfast store in June 2011 but had never worn them. She discovered the note just last week.

A Primark spokesperson said the firm has begun an immediate investigation.

The writer of the note claimed inmates were forced to work “like oxen” and were given food that would be considered unfit for animals.

It is not yet known if the allegations made in the note are genuine.

Mrs Wisínska, who lives in County Fermanagh, Northern Ireland, bought the trousers during a shopping trip to Belfast three years ago, but had never worn them because when she took them home, she found the zip was broken.

She put them into her wardrobe and did not take them out again until last week, when she was packing clothes for a holiday.

This entry was posted in Headlines and tagged China, Prison Worker. Bookmark the permalink.