Writers from across the globe gather in the city of Ourense, Galicia for the 82nd PEN Congress

Posted on 09/26/2016 by editor | Writers from across the globe gather in the city of Ourense, Galicia for the 82nd PEN Congress已关闭评论 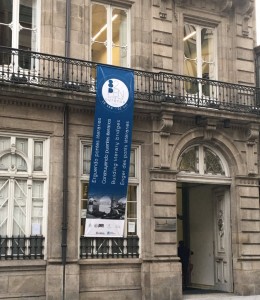 ‘In the words of former PEN President Arthur Miller ‘When political people have finished with repression and violence, PEN can indeed be forgotten. Until then, it is still a fellowship moved by the hope that the work it tries and often manages to do will no longer be necessary.’ The truth is that in 2016, our work is just as important as it was almost 100 years ago when we were founded. This meeting of our global community in the city of Ourense, is an opportunity to renew our commitment to the fundamental right of free expression and to say in one voice that we will continue this work, no matter how challenging until it is no longer necessary.’ – Jennifer Clement, PEN International president.

‘Galicia’s language and literature is the bridge between Portugal and Spain. The theme of the 82rd PEN International Congress – Building Literary Bridges – has been formed around the city Ourense in Galicia, in which these great literary traditions and cultures collide and we look forward to meeting our friends and colleagues from around the globe here.’– said Luís González Tosar, president of Galician PEN.

PEN’s diverse and unique community of writers and members gather each year to share ideas, discuss new campaigns and initiatives and highlight emerging global issues and challenges to freedom of expression around the world. Members will have the opportunity to attend literary events and workshops, and to share experiences of defending and promoting freedom of expression. In an important gesture of international solidarity, delegates will speak out on behalf of writers that are silenced in countries including Turkey, Egypt, China and Israel.