Xi Jinping Tells Chinese Media to ‘Speak for the Party’ 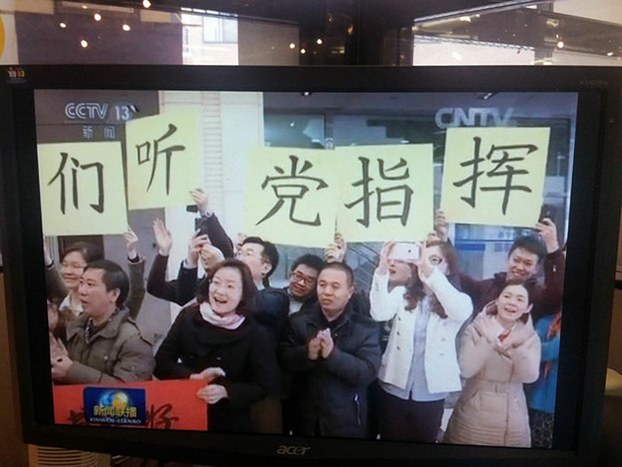 In one iconic image, Xi is shown sitting in the news anchor’s chair.

Xi’s visit also underlined support at the highest level for the projection of state-backed Chinese journalism far beyond the country’s borders, as he “showed approval” for Xinhua’s international expansion, which offers the voice of the Chinese government in news products and services in eight languages.

“Xi praised the branch for its work and sent his greetings to the staff, 90 percent of whom are Americans,” the agency said.

In a speech to a media symposium the same day, Xi made no bones about the fact that the Chinese media are indivisible from the ruling party.

“The fundamental issue of the party’s media work is to strictly adhere to the party’s leadership,” Xinhua quoted Xi as saying.

“All news media run by the party must work to speak for the party’s will and its propositions and protect the party’s authority and unity,” he said, calling for more “Marxist” education for China’s journalists.

China’s journalists should be “disseminators of the party’s policies and propositions,” providing guidance to the public and serving the country’s overall interests, he said.

Journalists should be chosen for their firm political beliefs, Xi said.

The rallying call to the media, which is already minutely managed by the party’s propaganda ministry under Liu, reflects Xi’s personal political ambition to preside over a global superpower, according to Ran Bogong, former politics professor at Toledo University.

“China is the second most important country in the world, second only to the United States and Xi’s great ambition is to deliver the Chinese dream,” Ran said. “What does that consist of? Put simply, it’s to be a wealthy superpower.”

“In this, Xi’s ambition is for China to become stronger and greater than it ever has been, even in its golden eras,” he said. “That’s why he needs to make a huge propaganda push, so as to make more space for China’s voice on the world stage.”

“Western countries are paying very close attention to developments in China,” Ran added. “And at the moment, it’s fair to say that out of 10 items of China-related news published in the Western media, eight will be negative.”

Last November, Reuters reported that the Chinese government secretly controls a network of overseas radio stations in 14 countries, indicating that Beijing is already taking its propaganda to a global audience.

The stations routinely broadcast Beijing’s take on global events to listeners in their own countries, using material that is created or supplied by CRI’s headquarters, or that originates from media companies that it controls, the report said.

Xie Jiaye, head of the New York-based Chinese Association of Science and Technology, said Xi is rallying state media in a bid to counteract the predominance of negative news stories about China in the Western media.

But he said the attempt to project homegrown propaganda overseas might not work.

“When people are saying bad stuff about you, you have to reply to them by telling the truth,” Xie said. “It’s not about winning some kind of combat.”

“They need to engage find different ways to engage in calm debate across a various kinds of international media,” he added.

Xie said Xi also intends to use the party’s formidable propaganda machine to boost adherence to the official line within the party itself.

This could also backfire, if overseas media are seen as having close ties to the Communist Party, he said.

“What we have operating internally in the party is democratic centralism,” he said. “But they also need to be able to take in dissenting opinions.”

The lack of separation of party and state could diminish the legitimacy of Chinese media outlets overseas, he explained.

“In the West, even government propaganda comes from the point of view of the state, and not from political parties,” Xie said. “If they want to achieve greater integration with the rest of the world, the party can’t play too great a role.”

Xi’s propaganda push comes after the International Federation of Journalists highlighted top-down controls over China’s media in its annual report for 2015.

“Propaganda, censorship, surveillance, intimidation, detention, brutality and attacks and televised ‘confessions’ have become go-to tools for the government as they tighten their grip on the media and the press in 2015,” the New York-based group said in a statement on its website.

President Xi has made the “united front” a key part of his plan to extend the Communist Party’s global influence via overseas intellectuals and rich businesspeople, especially in the media.

At the heart of the soft power approach lies Beijing’s concern with “hostile foreign forces,” often portrayed as the Western media and its emphasis on press freedom, human rights, and constitutional and democratic politics.

Reported by Yang Jiadai for RFA’s Mandarin Service, and by Ho Shan for the Cantonese Service. Translated and written in English by Luisetta Mudie.

This entry was posted in Headlines and tagged Media, Xi Jinping. Bookmark the permalink.