A letter to my husband Guo Yushan: II

Twenty days after the first letter to her husband, detained legal activist and scholar, Guo Yushan, Pan Haixia posted another exquisitely written follow-up letter to him online. In the time in between, Pan writes she is determined to honour Guo’s zest for life by not isolating herself: “I don’t want you to criticize me for indulging in self-pity” and “it would be unreasonable for me to act half-dead” when loved ones have been so supportive. Pan’s mood has become increasingly reflective, drawing on wisdom gained in moments past, as she finds herself embracing the philosophy that, “we little people all have an ultimate freedom that no one can take away: the freedom to choose the attitude with which we face our destinies.” She remains hopeful Guo will return home.

Economic scholar and influential think-tank founder, Guo Yushan, was taken from his suburban Beijing home by police officers on October 9, at around 2 a.m., on suspicion of “picking quarrels and provoking troubles” — an increasingly common offence used to silence China’s growing community of rights activists. 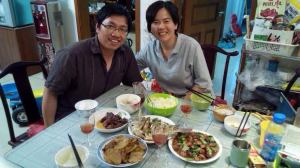 Guo and Pan in happier times.

Darling, it’s been twenty days already, and the lawyer still hasn’t been able to see you, so I don’t know how you’re doing. I only hope that you are eating and sleeping well, and staying calm. Good or bad, we’re in this together. As long as we are still alive, there is always hope.

After you were taken away, I was thrown into a state of panic and confusion. Anxiety, anger, and worry followed, but now I have begun to calm down. Since you’ve been gone, I’ve gotten together with our friends many times; we’ve eaten hot pot, even gone out to sing karaoke. But passing the time happily with friends, there remains a tiny voice in my heart asking, if you knew, what would you think? Would you feel angry, or lost, or relieved? Or would you once again “praise” me for being heartless?

Darling, don’t be angry, and don’t feel lost. I’m acting this way because I don’t want you to criticize me for indulging in self-pity. On top of that, our families and friends have been so good to me; it would be unreasonable for me to act half-dead around them. When I catch myself slipping into pessimism, I force myself to make positive plans, and life seems to become normal again – I no longer wake up in the middle of the night, or sit around in a daze during the day. Friends say that I’m looking better and that my spirits have improved. Yes, just like we agreed in the past, I am trying to live passionately on your behalf. Only that way can I honor the exuberance with which you live.

But without you, however normal life gets, there is a chill in a corner of my heart that I cannot warm up, no matter what I do. From time to time, it jumps out at me, reminding me that it still exists, and that it’s important.

Just like the other day in the subway station, when I came across a billboard advertising the November 11 Singles’ Day sales,1 and I suddenly remembered that November 11 is the anniversary of our marriage registration! Because we’d always celebrated our anniversary on the day of the ceremony, we’d never paid any attention to the date of our registration.2 I chose November 11 to signify that we would be “together for the rest of our lives.”3 On the day we registered, the Forum on China-Africa Cooperation was underway in Beijing, and as usual, your movements were restricted, so we had to travel by police cab (a lot of roads were closed to normal traffic).4 We left the house at eight o’clock and strode through the door of the Civil Affairs Bureau at nine – the auspicious times that mother had selected for us. After eight years, it’s as though nothing has changed: an international conference, traffic control5 … apart from the fact that you aren’t by my side.

Then there was the other day. Under the vast, clear sky – so rare – I sat in the conservatory, watching the sun turn everything golden yellow and warm. The tall trees beyond our outer wall swayed in the wind like they were dancing. The world was silent apart from the rustling of the leaves. The scene was so overwhelmingly harmonious and peaceful that I fell into a reverie. I imagined that you had never left, and were just taking a walk down by the lake. The next moment, I seemed to hear your laughter from beyond the wall, and a while later, I saw your stocky figure coming in through the door, calling out, “Wife, I’m back.” I held onto this vision, and waited, but it didn’t last … When I came around, it felt like everything had lost its meaning. What is life? What is love? In this world, there is only emptiness, so where did all these things that fill up our lives come from? In the end, the human realm is just a heap of yellow earth. What, then, can these pleasures and pains, joys and sorrows, amount to? Why should we care about them?

Thankfully, this chill only lasts a short while. Yes, it is precisely because this world causes people to give up all hope that love is precious. And it is precisely because life is short and unpredictable that we must allow it to unfold naturally. You and I have always lived passionately, exuberantly. During this temporary separation, each of us must do our best to pursue that kind of life, so that when we next meet, we won’t have outgrown each other.
For detail please visit here

This entry was posted in Headlines, Hong Kong Democracy, Writers in Prison and tagged Guo Yushan. Bookmark the permalink.