Cataloging the Torture of Lawyers in China 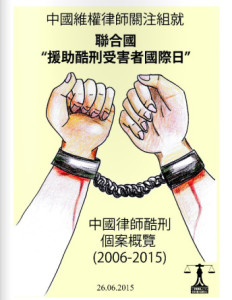 These are some of the forms of torture that Chinese security forces have taken up against lawyers in China, in particular those who dare to use the law as an instrument to protect individual rights, and by corollary limit the arbitrary use of power by the Chinese Communist Party.

The brutalization of these lawyers is documented in detail in a new report by the Hong Kong-based Chinese Human Rights Lawyers Concern Group (《中国律师酷刑个案概览(2006-2015)》. Despite the report’s detail — it looks at the abuse of 34 lawyers, and runs to nearly 50 pages — a version of it has not yet appeared in English.

The report first makes the customary acknowledgement to international convention, including the “Convention against Torture and Other Cruel, Inhuman or Degrading Treatment or Punishment” (ratified by China), which requires signatories to prevent all torture within their jurisdiction, under any circumstances.

The PRC has evidently violated that covenant in the treatment of China’s lawyers. The report even provides a “ranking table” of the “ten most common forms of torture” used on them.

These rankings on the punishments noted above, listing all the varieties of inflicted physical pain in each of the categories. In beating lawyers, for example, security forces may beat them repeatedly in the head for a long period of time, or slap them in the face, or ram their head into a wall again and again. In the case of Hunanese lawyer Cai Ying (蔡瑛), they tied him to a bed and shoved a sharp object into his anus.

Many of these lawyers, the report makes clear, are highly competent and distinguished in the law–not the rabble-rousers the Party attempts to paint them as. Cheng Hai (程海), for example, targeted for torture and abuse since 2009, was previously an investment consultant before becoming a distinguished lawyer, member of the All China Lawyers Association (中华全国律师协会), and a member of the Constitution and Human Rights Professional Committee of the Beijing Lawyers Association (before it was abolished). Cheng began taking on political cases in 2006, including people discriminated against because of their residency permits (hukou), Falun Gong practitioners and Tibetans who had been persecuted, and others. Cheng was locked in a cell for 5 hours, and punched in the face by guards, when he attempted to photograph his client, Ding Jiaxi (丁家喜), a rights lawyer and a key member of the New Citizens Movement in detention, in November 2013. 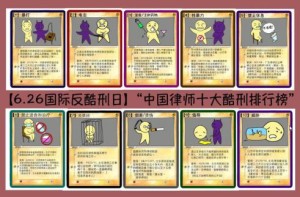 Teng Biao (滕彪) is another highly accomplished lawyer and scholar of the law, currently at Harvard University on a fellowship. Famous for his work on the seminal Sun Zhigang case of 2003, Teng took on a range of rights cases over the years. In 2008 he was abducted, shoved into a black car, taken to an interrogation room in a rural area, and put under high pressure “thought work” day and night, until he finally assented not to take on more rights cases before the Olympics in 2008.

One of the youngest lawyers featured was Dong Qiongyong (董前勇), only 34, who got his first taste of what it is like to attempt to uphold the law in China only three years after beginning the job. In September 2010, he was dragged out of a courtroom and beaten by the bailiffss, after calling attention to the improper security screening procedures being implemented against the defense, in a case involving Wang Yu (王宇), another lawyer beaten by railway attendants.

One of the most well-known persecuted lawyers, Gao Zhisheng (高智晟), is also featured. Gao, who wrote open letters to Chinese communist leaders decrying the persecution of Falun Gong, spent years in military dungeons, anonymous police lockups, and places of torture; he was shocked with electric batons and had toothpicks inserted into his genitals, in an attempt to have him recant his defense of the persecuted practice and speak against it in public. Gao Zhisheng, released from a remote prison in southern Xinjiang last August after serving a three-year sentence, is now recuperating in Urumqi but still not free.

In one image, Jiang Tianyong (江天勇), a veteran rights lawyer, bears his belly to show the scars of torture wrought during his stay in Jiansanjiang (建三江), a remote town in Heilongjiang Province, in March 2014, where he was among a group of lawyers locked up and abused for attempting to rescue practitioners of Falun 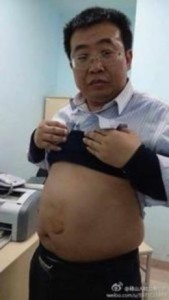 JIANG TIANYONG EXPOSES HIS STOMACH, SCARRED BY A BEATING WHILE IN DETENTION IN HEILONGJIANG, IN MARCH 2014. (JIANG TIANYONG/WEIBO.COM)

Gong locked up in a “black jail” by local authorities. Jiang was hooded, cuffed, hung from the ground, and kicked and punched with ferocity by what he estimates were five or six public security agents. He suffered eight broken ribs. After attempting to gain a diagnosis at a nearby hospital, he was told that “everything is normal,” as police stood nearby watching. (A real diagnosis was obtained from another hospital.)

Jiang Yuanmin (蒋援民), a lawyer who defended migrant workers, was paralyzed from the waist down for three months after being unable to sleep or lay down properly while in detention for his work, from April to June 2013.

Jin Guanghong (金观鸿), who also took on Falun Gong cases, was abducted from the street in 2011 and sent to a psychiatric hospital where he was injected with drugs and force fed.

Li Fangping (李方平) was disappeared on more than one occasion. In 2006, while attempting to offer legal defense to the blind activist Chen Guangcheng, Li was set upon by ten men in the street, and fiercely beaten until his face bled freely.

The report makes clear that in many cases, the torture does not stop these rights lawyers. Cai Ying, who was brutalized while in detention for nearly three months in 2012, was one of the first rights lawyers to rush to Jiansanjiang in 2014. He collected first hand reports of their treatment and saw that the world learnt about what happened. The activism of such lawyers is believed to be an important contribution to the decision to formally shut down the re-education through labor system in 2013.

And the law won, the rise and fall of China’s civil-rights lawyers says much about the Communist Party’s approach to the rule of law, the Economist, March 23, 2015.