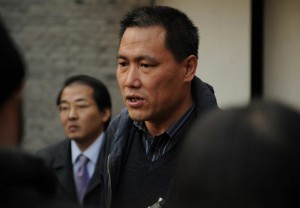 Rights lawyer Pu Zhiqiang, who has been held on questionable charges since May 2014, in an undated file photo.
AFP
Authorities in the Chinese capital on Tuesday indicated for the first time that racial hatred and public order charges against a top human rights lawyer are based on a handful of his tweets, his attorney said.

Pu Zhiqiang, 50, was indicted on May 15 for “incitement to racial hatred” and “picking quarrels and stirring up trouble” after being held in criminal detention for more than a year.

At a pre-trial meeting in Beijing, the prosecution revealed that the charges against him are based on just seven out of some 20,000 posts he made to Twitter-like platforms, Pu’s lawyer Mo Shaoping told RFA.

“Both charges rest entirely on the content of seven tweets,” Mo said. “Four are linked to the charge of incitement to racial hatred.”

“The picking quarrels and stirring up trouble charge rests on three tweets.”

He said Pu, who attended the pre-trial meeting, had admitted writing and sending the tweets.

Pu sent the tweets from several accounts he set up on the popular service Sina Weibo between 2012 and May 2014, partly to avoid government censorship, Mo said.

The “incitement to racial hatred” charge was based on a number of tweets he sent in the aftermath of the March 1, 2014 knife attack at Kunming railway station, which left 29 people dead and more than 140 injured.

Pu is accused of “venting his spleen” online and “using humiliating language,” as well as “harming race relations,” according to the charge sheet seen by Mo on Tuesday.

In one of the tweets seen by RFA, Pu takes aim at Shen Jilan, an elderly delegate who claims never to have voted “no” in the National People’s Congress (NPC). In another, he hits out at government official Tian Zhenhui, while in another he asks “why would China work without the Communist Party?”

“But you can’t select seven tweets out of 20,000 [that Pu sent], because that is to take what he said out of context,” Mo said.

“We requested that the targets of these tweets … called as witnesses to ask them whether they know Pu Zhiqiang and what sort of injury or consequences they suffered from these tweets,” Mo said.

“That needs to be confirmed.”

Mo said Pu had fully admitted that his tweets were very rude in tone.

“He offered to make a full apology in person,” he said.

Mo said the pre-trial meeting should be an indicator that Pu’s case will move to trial soon.

His lawyers have hit out at repeated delays and extensions to his stay in Beijing’s police-run No. 3 Detention Center.

Pu’s detention on May 6, 2014 came ahead of an event marking the anniversary of the military crackdown on the 1989 student-led pro-democracy movement at Tiananmen Square.

The lawyers are arguing that there is no need for Pu’s prolonged detention, because he isn’t accused of violent crime, and doesn’t represent a danger to society.

But she was prevented from entering the court building and taken to a separate room by police, who had thrown up a security cordon around the court, Shang said.
For detail please visit here