Gao Zhisheng: Join Them, and Prove Your Worth by Helping China’s Historic Change

Posted on 12/09/2015 by editor | Gao Zhisheng: Join Them, and Prove Your Worth by Helping China’s Historic Change已关闭评论

– A commentary in the wake of false charges against Guo Feixiong 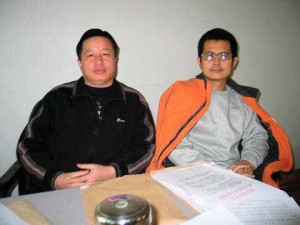 GAO ZHISHENG AND GUO FEIXIONG IN 2006.

Gao Zhisheng composed the following letter after hearing about the six year prison sentence handed to rights activist Guo Feixiong, and after reading Guo’s spirited defense and condemnation of the Party’s rule. As the letter made the rounds on social media, the Chinese authorities promptly cut off Gao’s cell phone service and placed him under house arrest in his late mother’s cave dwelling in Shaanxi Province. Both Gao Zhisheng and Guo Feixiong are Christians. — The Editors

I rarely suffer insomnia, but I woke up at 2 am this morning and couldn’t go back to sleep. This is only the second time it’s happened since I was put under house arrest in the village – the first was last year when I heard that Liu Xia [the wife of Liu Xiaobo] had been harassed.

In late April 2010, when I was being tortured by Chinese security forces—the sort of torture that shocks the perpetrators themselves—there was a brief let-up. One of the thugs, shirt off, reclined in a chair to catch his breath. I was laying on the ground on my side (my hands were cuffed behind my back), and before two minutes were out, I was letting out a ripping snore. Someone kicked me in the head: one of the thugs, shocked, had lept up to berate me: “Gao Zhisheng, does nothing effect you? We have trouble sleeping for several days after every one of these episodes, but you don’t. Are you human?” I responded: “That you weren’t able to sleep at night shows you’ve still got a vestige of humanity left.” Such is the rarity of my insomnia.

When I heard that Feixiong had been framed by the CCP, a terrorist group, even though it was within expectations, the brazen display of evil and inhumanity still shocked me.

Feixiong is among my closest friends. We knew each other late in life, and our contact was brief, but our friendship is profound. When he visited our home in Beijing, my wife would of her own accord go and bunk in our daughter’s room so that Feixiong would sleep in the same room with me to continue our talks. He was the only friend I could share a room with.

This morning in prayer, I thanked God for providing China with Guo Feixiong in our time, for strengthening him and giving him the power to strike terror into the evil forces, for making him an intimate friend of mine, and for having him become a peaceful, rational, and unique force for changing China.

This is Guo Feixiong. His final reply in court was brief yet epic, brimming with reason, justice, righteousness and the radiance of philosophy. Its vast and mighty power rocked this long-silent land.

Yesterday I spent several hours in a single sitting forwarding Guo’s reply in court to my relatives, friends, schoolmates, and friends from my days in the army. I have never done anything like this before, but this is my stance, and this is all that I can do physically for the time being.

Last night, those of my compatriots, living inside or outside China, who are still hopeful for this country and people, were probably doing the same thing.

This is a great achievement despite the ruthless suppression: between China today and China tomorrow, despite the brutality and cruelty, the forces for peaceful resistance are coming to the fore.

Yesterday I remarked to my relatives that Feixiong’s reply in court will be written into school textbooks in 2018. And before 2017 [when Gao predicts the collapse of the CCP], it will be passed around and read by those stupid, brutal, and selfish thugs that compose the CCP, keeping them—so expert at outfoxing others and so steeped in their own avarice—awake at night in a cold sweat.

The trumped-up charges against Feixiong represent another historic moment in the CCP’s barbaric attack against its own people, led by Xi Jinping. I hereby tell the terrorist CCP: this isn’t the end of the matter, but the beginning. All your crimes against humanity today will be paid for in 2017. I say this because there are some of you who are still mulling over your own future and that of your family. I say this in the hope that perhaps this will stir your humanity, so pathetically besieged by greed, fear, and ignorance. I say this not because I expect you will do anything to change China, but simply in the hope that it will give you a chance to reduce your personal sins in the time remaining, and leave you and your loved ones a way out.

i) The Chinese Communist party will end in humiliating collapse in 2017.

ii) The Chinese Communist Party will be declared a terrorist organization—and that’s how it will be passed into history and known for posterity.

iii) China will establish a special tribunal, trying the former regime leaders for their crimes against humanity.

iv) Jiang Zemin, Li Peng, Zhou Yongkang, Xi Jinping, Meng Jianzhu and all other perpetrators of crimes against humanity, whether big or small, will be subject to the punishment of the special tribunal. Among those who will be tried include all of the Standing Committee members of all Party committees, all of those who participated in the Guo Feixiong case, including the head of the province and city, the secret police and “judicial” personnel who were involved, and all of those who attach themselves to the CCP and help it do evil, such as the malefactors in the “lawyer’s association,” conniving scholars and journalists, as well as all those in the security forces—those who intercept petitioners, those who forcibly demolish houses, those who extort confessions through torture, and those who suppress freedom of belief, among others.

v) According to international standards, those who are guilty of crimes against humanity will, according to the crimes they committed, be executed, jailed for life, or imprisoned for fixed terms, among other punishments.

vi) All of the assets of CCP, and that of its criminal members, will be confiscated.

vii) For those members of the former regime whose acts do not constitute crimes against humanity, but against whom specific evidence of wrongdoing is presented by victims, normal criminal procedures will be followed according to principles of fairness and leniency, and full disgorgement of the ill-gotten proceeds will be made.

viii) For the CCP’s accomplices whose acts do not constitute crimes against humanity, their illegal gains will be disgorged, they will be prohibited from engaging in business for the rest of their lives or for a specific period of the time.

ix) For all individuals referred to above, whoever of them withdraws from CCP before September 30, 2016, and publicly exposes the truth they know of the crimes committed, publicly seeking atonement for the crimes they’ve been involved in—they will be spared punishment.

The CCP cannot even draw a lesson from the numerous historical examples of empire collapse: the Roman empire, the Assyrian empire, the Ottoman empire, the Soviet empire—all political groups who strutted about on the world stage, and none was able to escape destruction. As the late Tang poet Wei Zhuang wrote in The Lament of the Lady of Qin, epitomizing Chinese history: “The imperial tapestries and embroideries are burnt into ashes, and all along the Street of Heaven one treads on the bones of State officials.” The march of history does not pause because of a few evil men brandishing weapons. Democracy around the world rushes forth, unstoppable by any dictatorship. China’s enormous changes are at hand, and the powers of frenzied brutality versus peaceful resistance are clashing ever more strongly. But the outcome is inevitable: the destruction of the Communist Party, and the rise of a China governed by constitutional democracy.

Since 2012, the battle for China’s future has entered its final phase: Xi Jinping’s cruel suppression brought about a widespread, flourishing peaceful resistance movement. Not long ago in China, the number of peaceful opponents of the regime could be counted on one hand. Today, there are Guo Feixiong, Sun Desheng, Wang Mo, Gao Yu, Li Heping, Zhao Wei, Xie Yang, Pu Zhiqiang, Tang Jingling, Shan Lihua, Li Yufen… even collating the names of the prominent rights warriors would be a massive undertaking.

The unyielding, peaceful resistance of the Guo Feixiongs of China shows there is still nobility and energy left in the Chinese people. That these names are growing exponentially in numbers proves that we’ve still got backbone, still stand up straight, and that blood still courses through our veins.

The Guo Feixiongs are the dignity of the nation today, and the hope of the nation tomorrow. They and their relatives are the guarantors of and the last hope for China. Come and join them, and rise and resist through peaceful means to testify to one’s own existence and value, as unprecedented changes unfold in China. It is that feeling which inspires me to write these words today despite all the prohibitions around me.