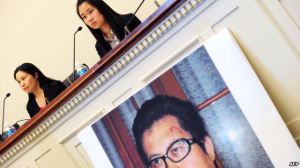 Guo Feixiong and Sun Desheng were arrested in August 2013 after taking part in rallies outside a newspaper that had complained of government censorship.

The trial began Friday in the southern city of Guangzhou. Those who face such charges are almost always found guilty and sentenced to several years in prison.

Ahead of the trial, Human Rights Watch called for the two to be immediately released, saying the activists are “allies in strengthening the rule of law, not enemies of the state.”

The Network of Chinese Human Rights Defenders (CHRD) also slammed the charges, saying the men were arrested “for exercising their rights to free speech and assembly.”

This entry was posted in Headlines, Writers in Prison and tagged Guo Feixiong. Bookmark the permalink.