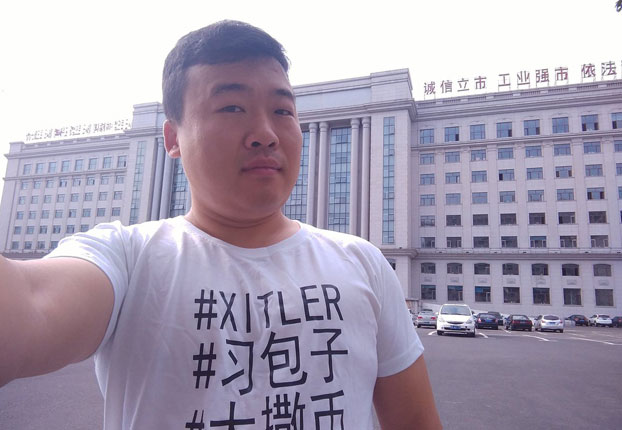 Chinese authorities have secretly detained a graduate of a U.S. university who supported human rights and pro-democracy campaigns after he told friends he would wear a T-shirt merging the name of President Xi Jinping with Hitler’s.

Ethnic Korean Quan Ping, whose name is also spelled in its Korean form, Kwon Pyong,  is being held by police in his hometown of Yanji city in the northeastern province of Jilin, and has been incommunicado for more than a month, RFA has learned.

Kwon Pyong’s detention came after he posted a selfie outside a government building while wearing a T-shirt with banned keywords linked to President Xi, including the word “Xitler.” He also told a friend he planned to walk around wearing it on Oct. 1, the anniversary of the founding of communist-ruled China.

He was also active on Twitter, which is blocked in China, and used social media to publicly criticize the “tyranny” of the Communist Party and express solidarity with causes like Free Tibet and the commemoration of those who died in the crackdown on the 1989 democracy movement on Tiananmen Square.

Kwon was last heard of on Sept. 30 after tweeting that he planned to take to the streets openly wearing the T-shirt, his U.S.-based friend Gu Yi told RFA.

“He had been contacting me every day since Sept. 8 to report that he was safe, because he realized he was being followed,” Gu said.

‘Called in for a chat’

“Previously, we didn’t think he would get into big trouble, although he had been called in for a chat with state security police after he sent postcards to detained human rights lawyers,” Gu said.

“But then he told me on Sept. 30 that he planned to walk around in that T-shirt. I told him not to do it, but he insisted,” Gu said. “We didn’t think he would run into trouble because he had worn that kind of T-shirt before.”

“But that same day, I got a text message from him that said ‘ran into trouble.'”

An officer who answered the phone at the Yanji municipal police department’s criminal investigations department confirmed that Kwon is currently in police custody.

“That’s right,” the officer said. “We are handling the case according to the law. Don’t call again.”

U.S.-based author and activist Rose Tang said Kwon, who went by the Twitter handle @BraveJohnny, showed an unusual dedication with his activism, which is less and less common among young people in today’s China.

“The Chinese Communist Party is suppressing young people like Kwon Pyong,” she said. “In fact, it’s very rare to find glowing embers of resistance like him during such dark times.”

“The Communist Party is doing everything it can to obliterate them.”

However, Kwon’s detention has sparked a rare show of online resistance among  Chinese students studying overseas, some of whom have been tweeting selfies including the words “Free Kwon Pyong.”

“This is a shameful display of state terrorism … and blatant repression of freedom of speech, as well as a serious violation of [his] rights by the authorities,” it said.

“Kwon Pyong has the strong social conscience and sense of justice of youth,” the IFCSS said.

“He continued to commemorate the June 4 massacre in the media and repeatedly expressed his support for arrested lawyers in the form of postcards and was prepared to protest against Xi Jinping’s erroneous policies.”

In doing so, Kwon was simply exercising his constitutional right to free expression, the group said, adding that “he showed the patriotism and courage of a Chinese citizen.”

“We urge the Chinese authorities to release him immediately and unconditionally,” the pro-democracy group said.

IFCSS member Chen Chuangchuang said Kwon also knew the risks he was running with such open activism within China’s borders.

“He knew there would be certain risks involved,” Chen said. “He even predicted it online before it happened.”

“He took to the streets wearing a T-shirt that was highly critical of Xi Jinping’s policies and of the Communist Party,” he said. “Two days later, he was incommunicado.”

“He is a young person, and to detain him just for wearing a T-shirt … shows that they are going after anyone young … who hasn’t been brainwashed by them,” Zhang said.

“They are terrified that more and more young people are going to realize the truth about the Communist Party, and start threatening or opposing its rule: that’s why they are cracking down so hard on them,” he said.

Reported by Ng Yik-tung and Sing Man for RFA’s Cantonese Service, and by Guo Yasa for the Mandarin Service. Translated and written in English by Luisetta Mudie.