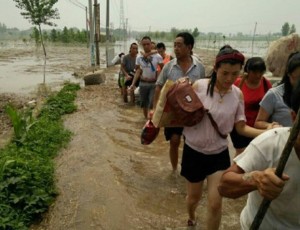 Authorities in the northern Chinese province of Hebei have detained three people for tweeting “false news” to social media after they posted reports that hundreds of people had died in overnight flooding near Xingtai city.

Police have detained a woman surnamed Dan and a man surnamed Hou for sending out social media posts to Baidu’s Tieba social media platform, in the aftermath of disastrous flooding on July 19 that left at least several dozen people dead, including children and the elderly.

Dan had posted to Tieba saying that “more than 700 people” had drowned as floodwaters from the Qilihe River engulfed their homes as they slept, police said.

Meanwhile, Hou had tweeted that the floods were caused by a deliberate release of excess floodwater from a nearby reservoir, a piece “false information that created panic,” local police said on their official social media account.

And Shi had “deliberately exaggerated” the number of deaths in the disaster, the police statement said.

Residents of the flooded villages told RFA at the time that the authorities had deleted all social media posts related to the flooding, although it was unclear exactly how many people had died.

“In my village alone, nine people died,” a resident of Daxian village told RFA in a recent interview. “Our village wasn’t too badly hit, but it was really bad in Taitou and Guikuang villages.”

“I think if we’re received notification from the government in time to evacuate, then this never would have happened,” he said.

Asked if the government was covering up the extent of the casualties, he said: “That’s right. They are deleting everything. They don’t want it to get out.”

The Nanhe district police department posted a warning on its official microblog page on July 19, warning people of potential threats to lives and property.

“Please tell all your friends and relatives with homes or business in Xingqiao township and ask anyone living the Sanzhao area to evacuate,” the post said.

“There are plans to release floodwater from the Zhuzhuang Reservoir at 3.00 a.m., so all local residents need to co-operate with local police and officials to avoid any threat to lives or property,” it said.

“Evacuation should be completed before midnight.”

But the Daxian village resident said the authorities had neglected to mobilize local officials and police to evacuate the area before releasing the floodwater.

“They didn’t inform the people on the ground,” the resident said. “The local people knew nothing about it, so they died in their homes.”

He added: “They had no warning. They just drowned in their houses, children and old people, mostly.”

He said the authorities had done little to aid the rescue effort, and villagers were relying on family and friends for help.

An official who answered the phone at the Xingtai city disaster relief center on July 22 said reports of casualties “will continue to be released,” but declined to comment on the death toll.

China now routinely clamps down on unverified reporting via social media, in a bid to retain control of a single, official version of events.

Online activist Xiucai Jianghu said officials are terrified that the truth will emerge via social media, however.

“I [think] it’s the officials who are spreading rumors, and the people should detain them instead,” he said, in a reference to the official versions of events reported in media controlled by the ruling Chinese Communist Party.

“What’s more they have a long history of doing so via the People’s Daily, Xinhua news agency and CCTV,” he said. “I think it’s the official figures that are unreliable.”

Reported by Yang Fan and Qiao Long for RFA’s Mandarin Service, and by Lau Siu-fung for the Cantonese Service. Translated and written in English by Luisetta Mudie.