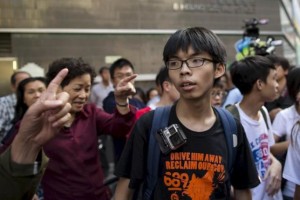 Malaysia on Tuesday denied entry to a prominent teenage Hong Kong activist for a series of talks on democracy in China, raising concerns that Beijing may have put pressure on Kuala Lumpur.

Joshua Wong, 18, was one of the leaders of last year’s pro-democracy protests in Hong Kong that paralyzed key roads in the city for 79 days and presented China’s Communist Party leadership with one of its biggest political challenges in decades.

Wong and other protest leaders were accused by China’s state media at the time of trying to foment a “color revolution” to undermine Beijing’s rule.

He had been invited to Malaysia to participate in academic talks ahead of the 26th anniversary of Beijing’s Tiananmen Square demonstrations and bloody crackdown on June 4.

“I don’t rule out that there is pressure from the Chinese government,” Wong told reporters on arrival at Hong Kong airport.

Wong was detained soon after arriving at the airport on the island of Penang on Tuesday morning, then put on a plane back to Hong Kong soon after. He said a Malaysian immigration official had told him it was a “government order” to deny him entry.

Penang immigration authorities declined immediate comment when contacted by Reuters. The Malaysian Consulate in Hong Kong confirmed that Wong was listed as “not allowed to land” but declined to provide any additional information.

“We’re angry at the government’s actions because there’s no reason that the Malaysian government should stop us from organizing any international talk on the democracy movement.”