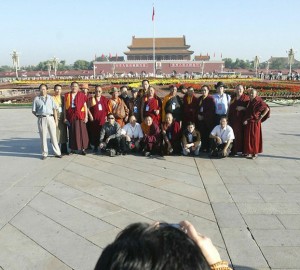 According to online reports, the Chengdu municipal tourism office has issued a directive ordering travel agents not to accept Chinese citizens from Tibetan areas, any ethnic Tibetans regardless of origin, onto package tours leaving China between May 20 and July 15.

The new regulations require travel agents and package tour operators to change their promotional literature to include a disclaimer stating that tour packages are subject to tourists holding effective travel documents which must be verified by the travel agency before signing up for a trip, unconfirmed tweets reported.

An employee who answered the phone at the Guangda International Travel Agency in Chengdu on Friday confirmed that the rules are in place, however.

“For the time being, we aren’t accepting Tibetans,” the employee said, when contacted by an RFA journalist posing as a potential customer traveling with a passport-holding Tibetan friend.

Asked when Tibetans would be able to travel, she said: “After July 15. They can’t right now.”

The employee said she was unaware of when the regulations started, and that she didn’t know the reason for them.

“I’m not really sure about that,” she said.

An employee who answered the phone at the Huanqiu International Travel Agency in Chengdu on Friday also said Tibetans were barred from joining overseas tour groups.

Asked when the rules came into effect, the employee said: “You’d better take a look at the news. I really don’t know.”

An official who answered the phone at the Chengdu municipal government tourism bureau said she had heard unconfirmed reports of the rules.

But asked if they were issued by her office, she said: “I don’t think they were.”

“I have heard this, but I can’t say for sure whether it’s true or not,” the official said.

“But I know about it because we received a complaint about it, and the complaint was about not being able to leave [the country] in the period up to July 15,” she added. “I won’t know if it’s true until we have investigated this complaint.”

Employees at a number of travel agencies in Beijing, and in Urumqi, regional capital of the troubled northwestern region of Xinjiang, said they had received similar orders regarding Tibetans, but that the mostly Muslim ethnic Uyghurs are still allowed to leave if they hold a valid passport.

Jamyang, a Chinese-language spokesman for the Tibetan government-in-exile in the northern Indian town of Dharamsala, said Tibetans have found it hard to get passports since a serious of regional uprisings in 2008.

“Since 2008, Tibetans’ haven’t been able to get passports, and we have seen fewer and fewer people coming out of [protest hotspots] Ganzi and Ngaba since 2008, because it’s so hard to get a passport,” Jamyang said.

But he said he hadn’t heard about the latest restrictions, which come after a wave of self-immolations by Tibetans in protest over Chinese Communist Party rule.
For detail please visit here

This entry was posted in Headlines, Tibetan and tagged China, Leaving, Tibetans. Bookmark the permalink.