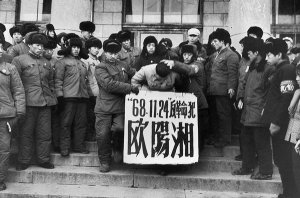 Ouyang Xiang, son of a denounced former Party secretary in Heilongjiang province, being persecuted during the Cultural Revolution for sending an unsigned letter to the local revolutionary committee in his father’s defense, Harbin, November 1968. The sign around his neck bears his name and the date of his offending letter. When he tried to shout ‘Long live Chairman Mao,’ his mouth was stuffed with a glove. Several days later he was pushed out of a third-story window; the official report called his death a suicide.

In downtown Beijing, just a little over a mile west of the Forbidden City, is one of China’s most illustrious high schools. Its graduates regularly attend the country’s best universities or go abroad to study, while foreign leaders and CEOs make pilgrimages to catch a glimpse of the country’s future elite.

Founded in 1917, it has been lavishly rebuilt over the past few years, with a sleek new gym, dining hall, and classrooms—a monument to a rising country. But to many Chinese people of a certain age, the Experimental High School Attached to Beijing Normal University conjures up another image—that of a group of fanatical girls torturing their vice-principal to death.

For years, the event has been of interest to foreign scholars of the Cultural Revolution; it is a Lord of the Flies story that has attracted academics investigating female violence, filmmakers trying to document the mindset of violent Red Guards, and researchers trying to piece together how many people were killed, by whom, and how. In China, the story is more veiled. In official accounts it is usually mentioned as an example of the chaos that the country should avoid, and it is heavily censored to conceal the fact that many of the young women were children of the Communist elite, and today are prominent members of society.

But this is changing, part of a broader movement intended to shift discussion of sensitive questions from the private into the public sphere. Led by samizdat publications like the online journal Remembrance,* accounts of violence—including the vice-principal’s killing—are being published and passionately debated. More remarkably, people are even apologizing publicly for their actions, setting off long-overdue discussions about how China should deal with its violent past, especially when many of the victims are dead. Is it best to forget, which the country has largely done, or is there merit in digging up the past? And is it possible to have a cathartic confrontation with the past in a country with no real public sphere?
Over the past year, the apologies for wrongdoing have come in rapid succession. One man in Jiangsu wrote in a magazine about how he had informed on his mother, leading to her execution. In Beijing, an editor wrote an account of how he’d beaten a peasant who he thought hadn’t shown enough enthusiasm for Mao’s ideas. And in Shandong, a man took out a small advertisement in a magazine, saying that he had beaten and spat on teachers but now, approaching old age, “I cannot forget what I have done wrong.”

The most widely reported was last year’s apology by Chen Xiaolu, the son of a famous general. Chen said that he had led a Red Guard–style police unit but failed to protect teachers at his school from being humiliated and beaten savagely by students. Chen was widely praised for his apology, but after about a month censors closed down discussion—taking the relevant blog pages off line—because the issue was too sensitive. In an interview, Chen said one motivation for speaking out is his fear that many behavioral patterns haven’t changed in China. “In 2011, people were beaten during the anti-Japanese protests,” he told me. “People still have that violence, that anger.”

None of the apologies has touched a deeper nerve than one made earlier this year by a reluctant sixty-five-year-old woman—one of the girls who had stood by as her vice-principal was sadistically tortured to death. Song Binbin had been one of the school’s student leaders as the Cultural Revolution unfolded starting in May 1966. The daughter of a famous general, Song Renqiong, she participated in writing vitriolic “big character posters” denouncing the teachers and administrators of what was then an all-girls school. Taking their lead from China’s god-like leader, Mao Zedong, she and other classmates concentrated their attacks on authority figures, who Mao said had betrayed the Party.