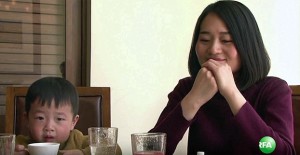 Li Wenzu (R), wife of detained rights attorney Wang Quanzhang, says state security police officers prevented her and their son from leaving their home in an interview with RFA on Aug. 11, 2016. RFA

Chinese authorities are continuing to mete out punishment by association to the families of detained human rights lawyers and activists, preventing them from leaving the county on “national security” grounds, activists said.

In one case, the 17-year-old daughter of exiled rights activist Liu Huanjun, now resident in the United States, was stopped by police at Beijing’s international airport after she tried to board a flight to meet him in Hong Kong for a vacation.

“They reason they gave was that my daughter would be a danger to national security if she were allowed to leave,” Liu wrote via social media.

“But what harm can a 17-year-old child do?” she wrote. “The Chinese government is shameless.”

Liu, a former primary school teacher who first became engaged in rights work during a bitter eviction struggle, has a long history of vocal and conspicuous campaigns against the ruling Chinese Communist Party.

She was detained in 2013 for calling on the nation’s leaders to reveal details of their wealth, and threw herself in front of the motorcade of President Xi Jinping during his September 2015 state visit to the United States to protest rights violations.

“Li Wenzu was prevented from leaving her home … by four state security police, who surrounded her and wouldn’t let her call a taxi,” Wang’s defense lawyer Yu Wensheng told RFA in a recent interview.

Yu said he suspects the authorities fear Li Wenzu will seek out a lawyer for her husband or apply for information about his trial.

Wang was detained during a nationwide operation targeting human rights lawyers and their associates that began on July 9, 2015.

Yu said Wang had issued a statement declaring that he wouldn’t be hiring any lawyers, dismissing the “declaration” as illegal, and likely the result of heavy pressure from the authorities in his police-run detention center.

The families of detained activists and lawyers frequently face eviction from their homes, as police put intense political pressure on their landlords to terminate their rental agreements.

Wang told RFA on Wednesday: “Our tenancy agreement ended on Aug. 11, and the landlord has been threatened by the police who say they are not allowed to rent the apartment to us anymore,” she said.

“The landlords told me they had been hauled in twice for questioning by the police, who basically forbade them to rent it to us,” Wang said.

“I haven’t yet found another place to stay, so it looks as if we may be forcibly evicted,” she said.

But the call was terminated abruptly, and further calls to Wang’s phone rang unanswered.

Yu said he is concerned about Wang and her child.

“I haven’t heard from Wang Qiaoling; I think they are perhaps trying to force her to leave Beijing, which is politically sensitive,” Yu said.

“They probably figure it’ll be easier to control her if she moves elsewhere in China,” he said

“We are trying to find somebody to help them out, because the police are putting huge pressure on their landlords,” he said, adding: “Ordinary people have no way of resisting the police.”

“If this dictatorship carries on, they pretty soon we’ll all be under similar levels of oppression,” Yu said.

Authorities in Tianjin last week put on trial four rights lawyers on subversion-related charges after denying them access to lawyers or visits from friends or family for more than a year.

Some were bailed or handed suspended sentences after they produced videotaped “confessions” which activists said were heavily scripted.

Thirteen lawyers and rights defenders remain behind bars in Tianjin and look set to be dealt with similarly, rights groups said.

Police have detained, interrogated or threatened more than 300 human rights lawyers and activists since the crackdown began with the detention of prominent Beijing Fengrui lawyer Wang Yu and colleagues on the night of July 9, 2015.

Many family members of those detained now face surveillance, house arrest or bans on leaving the country.

According to the Hubei-based Civil Rights and Livelihood Watch, more than 300 people have been targeted by China’s nationwide “stability maintenance” domestic policing system in the past month alone.

“During July, at least 363 people have been targeted in stability maintenance operations,” the group said in a report published on its website on Friday.

“The authorities are continuing to step up their operations against target groups, including the families of detained rights lawyers,” group founder Liu Feiyue told RFA.

“They are paying particular attention to news and information online, with a bunch of new rules targeting ‘fake’ news,” Liu said.

“Things are much worse than they were in June, even with the politically sensitive date of June 4,” he said, in a reference to the anniversary of the 1989 Tiananmen Square massacre.

“A lot of people had their liberty curtailed, were taken out of town, but we have seen a lot of that in July as well,” he said.

“So it seems that the security crackdown is now running all year round,” he said.

Reported by Xin Lin and Qiao Long for RFA’s Mandarin Service, and by Wong Lok-to for the Cantonese Service. Translated and written in English by Luisetta Mudie.