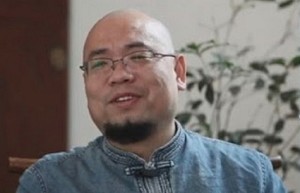 The case of a Chinese blogger and activist known as “Super Vulgar Butcher” has been transferred to a court for indictment. Wu Gan, known for his creative protests on sensitive topics, was detained in May 2015 for joining a demonstration staged by lawyers seeking to reopen an old case. Following his detention, state media launched a high-profile attack to discredit him.

One of his lawyers, Ge Yongxi, was not permitted to meet with Wu on Tuesday, and has filed a complaint with the court against a detention centre for violating his right to carry out his work as a lawyer, according to US-backed Radio Free Asia.

Wu worked for the Fengrui Law Firm in Beijing, a main target in the “709 crackdown” which began with lawyer Wang Yu’s arrest in July 2015. His case was transferred to the nearby city of Tianjin last February, meaning that it is likely authorities are treating his case as part of the crackdown, his lawyer previously said.

When Ge requested to meet with Wu at the Tianjin No. 2 Detention Centre on Tuesday, he was told that Wu’s case had been transferred to the court and that he would only be allowed to meet him as an official defense lawyer recognised by the court. The meeting was refused despite the fact that he had submitted the relevant documents to the court that morning, according to the lawyer.

Ge and Wu’s other lawyer Yan Xin were permitted to see Wu in December. After the meeting, they filed a complaint to the local prosecutor’s office saying that Wu had been tortured during his detention. It said that Wu was repeatedly held in solitary confinement, not permitted to sleep for several days and had been interrogated more than 300 times since he was detained.

Wu was originally detained on charges of defamation and “picking quarrels and provoking trouble,” a blanket charge often used to silence critics of the Communist Party. Authorities later issued a formal arrest on charges of “inciting subversion of state power,” and in August, the charges were changed to the more serious “subversion of state power” in addition to “provoking trouble.”

Wu’s case was transferred to the prosecutor in August but was sent back to the police for further investigation after 10 days.