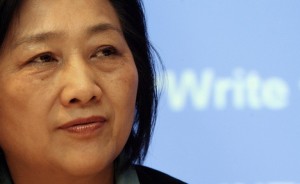 HONG KONG-LITERATURE-FREEDOMBeijing-based veteran journalist, Gao Yu, ‘disappeared’ on 23 April 2014 and was held incommunicado for two weeks before the authorities disclosed, in a televised ‘confession,’ that she was being held on suspicion of ‘leaking state secrets abroad’. She remains detained pending trial, and faces a lengthy prison sentence if convicted. She is currently being held in No. 1 Detention Center of Beijing City, and there are serious concerns for her well-being. PEN believes that Gao Yu is being persecuted for her legitimate professional activities, and is calling for her immediate and unconditional release.

Gao Yu, now aged 70, is former chief editor of Economics Weekly and contributor to the German newspaper Deutsche Welle. At the time of her disappearance she was writing a column titled “Party Nature vs. Human Nature”, which is said to focus on the new leadership of the Chinese Communist Party and its internal conflicts. The article was never submitted, and when she did not attend as scheduled a 26 April event in Beijing to commemorate the 4 June 1989 anti-government protests which were brutally suppressed, friends reported her disappearance. Gao Yu had also been due to travel to Hong Kong to speak at the annual awards ceremony of the Independent Chinese PEN Center (ICPC), of whom she is a member, on 3 May.

On 8 May 2014 Gao Yu appeared in a televised ‘confession’ shown on China’s national broadcaster CCTV in an early morning news programme. The report blurred out her face but showed her full name, ending speculation over her whereabouts. In the broadcast Gao Yu said ‘I admit that what I’ve done touched on legal issues and threatened national interests.’ She said she was ‘deeply remorseful’ of her actions and ‘willing to accept legal punishment’. The ‘confession’ is feared to have been extracted under duress, heightening concerns for her well-being and chance of a fair trial. The right to a fair trial, as enshrined in Article 14 of the International Covenant on Civil and Political Rights includes the right to be presumed innocent until proved guilty and not to be compelled to testify against oneself or to confess guilt. As a signatory to the International Covenant on Civil and Political Rights, which provides for freedom of legitimate expression, the right not to be arbitrarily detained and the right to a fair trial, China is obliged to “refrain from acts that would defeat or undermine the treaty’s objective and purpose”.

According to Gao’s lawyer, the charges against her are believed to be based on a document known as “Document Number 9″, which Ms Gao had written about last year. The document is said to detail the government’s vision of pushing economic reforms while maintaining ideological controls concerning issues such as democracy, civil society and freedom of press.

Gao Yu’s arrest came in the run-up to the 25th anniversary of the military crackdown on the 4th June 1989 democracy movement, and a renewed crackdown on dissent.

Gao Yu has been a PEN main case since 1989, when she was one of the first people to be detained in the crackdown on the pro-democracy protests. She was first arrested on 3 June 1989 for an article she wrote for a Hong Kong newspaper supporting student protesters in Tiananmen Square, and was imprisoned for over a year. She spent a further five and a half years in prison from 1993-99 for ‘providing state secrets to parties outside [China’s] borders’ in a series of political and economic articles in Hong Kong-based publications. Gao Yu is known for her fiercely critical political analysis and knowledge of the inner circles of the Chinese Communist Party.

Gao Yu has continued to work in China as a freelance journalist in spite of considerable restriction and pressure. She contributed an essay to PEN’s 2013 report “Creativity and Constraint in Today’s China.” She is an honorary director of ICPC and an honorary member of Czech PEN and Swedish PEN.

Expressing serious concern for the arrest and well-being of veteran journalist Gao Yu, and urging that she is protected from ill-treatment and granted access to family and a lawyer of her choice;
Calling for her immediate and unconditional release if, as feared, she is being persecuted for her legitimate professional activities;
Reminding the Chinese authorities that Article 35 of the Constitution of the People’s Republic of China provides for freedom of speech and that as a signatory to the International Covenant on Civil and Political Rights, which provides for freedom of legitimate expression, the right not to be arbitrarily detained and the right to a fair trial, they are obliged to “refrain from acts that would defeat or undermine the treaty’s objective and purpose”.
Send appeals to:

It is recommended that you send a copy of your appeals via the diplomatic representative for China in your country.

PEN members are encouraged to:

Publish articles and opinion pieces in your national or local press highlighting the situation in China.
Organise public events, stage readings, press conferences or demonstrations.
Share information about China and your campaigning activities for Gao Yu via social media
SOLIDARITY

Elect Gao Yu as an Honorary Member of your Centre and by doing so provide long term support and advocacy for her and her family. For details of the PEN International Honorary Membership scheme, read the PEN WiPC Guide to Defending Writers Under Attack (Part V, pgs 15-20). Please let us know if you do so and we will ensure that your Centre is put in contact with others working on the case.
Release Gao Yu Immediately and Unconditionally
This petition is to demand that the President of the People’s Republic of China release Gao Yu immediately. Please complete and send the petition below to add your voice. You may edit the petition if desired, before sending.