‘Did We Stand on the Side of Tank Man?’: An Interview with Teng Biao 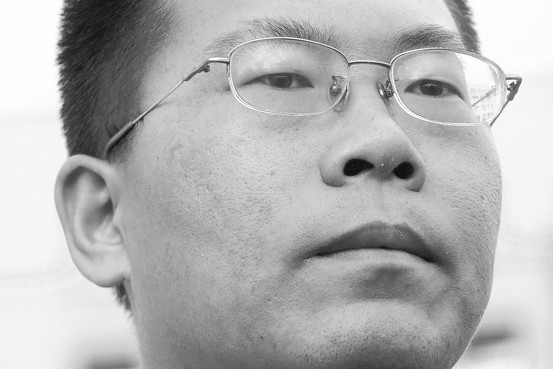 At a U.S. Congressional-Executive Commission on China hearing in Washington on the 26th anniversary of the Tiananmen Square crackdown this week, prominent Chinese human rights lawyer Teng Biao presented his listeners with a choice.

“History will require us to answer one question: Did we stand on the side of the ‘Tank Man,’ or on the side of the tank?” Mr. Teng said Wednesday, referring to the iconic photo of a lone man blocking a convoy of military vehicles during the 1989 crackdown on pro-democracy protesters in Beijing.

Mr. Teng isn’t from the generation that marched in Beijing and other cities 26 years ago; at the time he was a high school student at a county in northeastern China.

Mr. Teng rose to prominence more than a decade ago for taking on civil rights, religious freedom and other cases that eventually drew the ire of Chinese authorities. His law license was revoked in 2008; authorities have not publicly given a reason. He was harassed and in 2011 was detained for more than 70 days in an unknown location, with officials again declining to publicly address his treatment. He left the mainland in 2012 for Hong Kong.

A year ago, the normally soft-spoken Mr. Teng delivered a forceful speech in Hong Kong’s Victoria Park, declaring at a vigil commemorating the 25th anniversary of the Tiananmen crackdown: “You can’t kill us all.”

Now, the former visiting scholar at the Chinese University of Hong Kong is a fellow at Harvard Law School. China Real Time spoke with Mr. Teng by telephone on Thursday to hear his perspective on the state of civil society in China one year after his Hong Kong speech.

How do you view the current rights situation in China?

“For more than two years, the human rights situation in China has been regressing. Ever since Xi Jinping took office, all of civil society has been treated much more harshly than before. Civil rights defenders have been arrested and sentenced to prison. Churches, as well – it doesn’t matter whether or not it’s an official church. The situation right now is really terrible.”

You said in Washington this morning, “History will require us to answer one question: Did we stand on the side of ‘Tank Man,’ or on the side of the tank?” What did you mean?

“(The ‘Tank Man’ photo) has a very strong symbolic meaning. On the one hand, it expresses the viciousness and bloodiness of the Chinese Communist Party. On the other hand, it illustrates the courage and determination of the Chinese people to fight for democracy and freedom.”

You gave a striking speech in Hong Kong last year on June 4. When you look back at that day, what do you feel?

“It was a very special date for me, because it was the first time I went to Hong Kong to participate in the June 4th commemoration and had the opportunity to give a speech.”

“I didn’t experience the national movement in ‘89. Neither was I a witness to the massacre. But I have always considered myself to be a survivor of it. This massacre didn’t end in 1989. It carries on to this day. And it continues to have a big impact on China’s current political system, as well as on the relationship between the people and the government.”

This morning in Washington, you also brought up the issue of China’s new draft foreign NGO law. What kind of impact do you think this law will have?

“This new foreign NGO law will likely have a big impact. It will give the police the power of management and oversight. Before, this authority belonged to the Ministry of Civil Affairs. A lot of foreign NGOs are now worried they won’t be able to continue their work in China.”

“In addition to the foreign NGO law, there’s also the draft national security law and draft anti-terror law. All of these will strengthen the powers of the police. They will legitimize certain methods that were previously illegal.”

What are your personal plans? Do you think you will one day return to China?

“Right now, I’m in America. I hope I can return to China before long. But currently, there’s no way I can go back. A lot of members of the New Citizens Movement, such as Xu Zhiyong and Ding Jiaxi, have all been arrested and sentenced to jail. And a lot of rights defenders have all been arrested. Many activities and organizations that there was space for in the past – there’s no longer any space for them.”