China’s ban on a popular drama and a new book highlights its fluctuating stance on homosexuality. Can Taiwan serve as a positive influence? 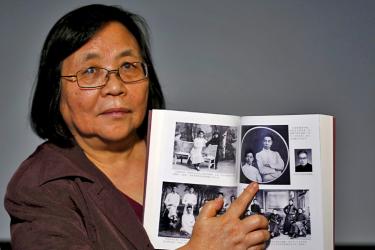 Tsoi Wing-mui, author of a new book, The Secret Emotional Life of Zhou Enlai, points to a photo in December of last year of a young Zhou Enlai and a schoolmate. Photo: Reuters

The romance between Gu Hai (顧海) and Bai Luoyin (白洛因), two handsome gay senior high school students from the Web series Addiction (上癮), has caused a sensation in both China and Taiwan.The program was seen by 10 million viewers on the day of its release in January, setting a new record for China’s television industry and was the most watched show on China’s leading video streaming sites. Netizens on both sides of the Taiwan Strait, it seemed, had become addicted to Addiction.

Then the Chinese government shut the series down.

Early this month, Beijing issued new guidelines for television just a week after the popular gay-themed drama was pulled, banning them from including storylines involving homosexuality and other “vulgar, immoral and unhealthy” content that “exaggerates the dark side of society.”

The disappearance of the series late last month, which triggered an uproar on social media, displays “Chinese authorities’ distinct discomfort regarding homosexuality,” Time magazine reported. Such discomfort is also reflected in China’s handling of The Secret Emotional Life of Zhou Enlai (周恩來的秘密情感世界), a new book about the late Chinese premier Zhou Enlai (周恩來).

When the Chinese Communist Party (CCP) defeated the Chinese Nationalist Party (KMT) in 1949, Zhou became the first premier of the People’s Republic of China, holding the post until his death in 1976. Charming, gentle and sophisticated in public, he presented a modern face as the country’s second most powerful man, serving as a role model for a “new China.”

But a new book, Secret, says that he may have been gay.

“Zhou Enlai was a tragic figure. He was very famous and always under the media spotlight,” the book’s author Tsoi Wing-mui (蔡詠梅) told BBC News. “But there were many aspects of his life that were like riddles and difficult to explain.”

Tsoi’s hypothesis is based on Zhou’s diary entries and personal letters, alleging that he harbored a lifelong love for a schoolmate, and that his sexual orientation would perfectly explain some “mysteries” about his life.

Tsoi said these mysteries include Zhou’s coldness toward his wife Deng Yingchao (鄧穎超), a former chairwoman of the Chinese People’s Political Consultative Conference, in a “marriage of convenience” that benefited their political purposes.

It also helps to explain his absolute obedience to Mao Zedong (毛澤東), who may have threatened to reveal his secret. After all, Tsoi stressed, homosexuality was seen as a sin against socialism because the communists, somewhat oddly, labeled it “a capitalist way of life.”

Unsurprisingly, Tsoi’s book has been banned in China. Hong Kong entertainer Wong He (王喜) was even cut from a CCTV variety show after he shared on Facebook an article about the book.

The bans on the popular drama and new book make it clear that China has yet to accept homosexuality. Indeed, the Chinese government did not decriminalize gay sex until 1997, and homosexuality was classified until 2001 as a “psychiatric disorder.” The world’s largest country by population has no openly gay politician because that would be political suicide.

Beijing likes to show its strength through authoritarian gestures, but censorship on homosexuality, like many other human rights issues, merely shows its fear and causes considerable anger among its population.

Shanghai Pride (上海驕傲節) spokesman Matthew Baren recently said that while it is “disappointing” that Addiction has disappeared, “it’s very encouraging to see shows about homosexuality being made in China, by Chinese talent and for Chinese audiences.”

Though it was reported last week that a gay-themed variety show has been rejected by several TV stations due to the sensitivity of the issues it would tackle, Taiwan is considered relatively friendly to the LGBT community and can play a progressive role. By offering greater protection of LGBT rights, it can distinguish itself by upholding the universal value of human rights and set a good example for less progressive societies.