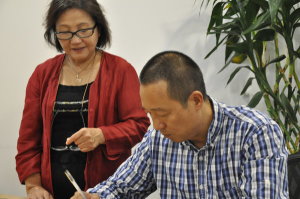 Xu Xiao, left, with the writer Zheng Shiping, who uses the pen name Yefu, at a lecture in September 2012.

Even amid a hardening crackdown on civil society and rights activists in China, many journalists and writers were caught off guard when Xu Xiao, a mild-mannered culture and books editor at Caixin Media magazine, was taken away last week by the Beijing police on suspicion of “endangering national security.”

Days later, it remains unclear what precisely brought misfortune on the diminutive 60-year-old. No one has been allowed to see Ms. Xu since she was taken into custody on Nov. 26. But she isn’t the only one: that day Liu Jianshu, 28, an N.G.O worker and movie enthusiast, disappeared too, his wife, Zhao Sile, said on Wednesday.

There were threads in common — both were said to be involved in setting up rural libraries for the poor, the Liren Rural Library project, and had ties to loose groups of citizens interested in political development.

But the news of the detentions of Ms. Xu, Mr. Liu and others in recent days has unsettled Chinese intellectuals and activists, illustrating a creeping fear: Anyone, it seems, is vulnerable — you don’t have to be a firebrand to get into trouble, they say. Being networked and in the wrong place at the wrong time may be enough. Or perhaps just “being” may be enough these days, they say, in a treacherous political landscape.

“Don’t ask again why ‘disappearance’ fell on Xu Xiao’s head,” Zeng Jinyan, a Hong Kong-based rights advocate and Ph.D. student wrote on her blog. She listed a dozen other recent disappearances, detentions or arrests of people in the literary, legal or N.G.O. worlds, including the social activists Kou Yanding and Guo Yushan.

This entry was posted in Writers in Prison and tagged Xu Xiao. Bookmark the permalink.