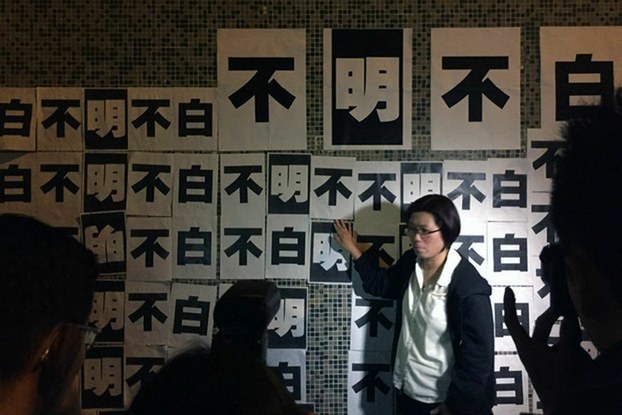 Staff at Hong Kong’s Ming Pao newspaper stick protest slogans to the walls after the sacking of a senior editor, April 20, 2016. Photo courtesy of the Ming Pao staff association.

The sudden sacking of a senior editor at Hong Kong’s Ming Pao newspaper after the paper ran a front-page expose of local figures based on the Panama Papers sent shockwaves through the city’s media industry on Wednesday.

The paper ran a front-page report based on files leaked from the Panama-based law firm Mossack Fonseca by the International Consortium of Investigative Journalists (ICIJ) in Wednesday‘s edition.

Seven media unions and associations said they were “deeply shocked” by Keung’s dismissal, which has sparked further fears that the city’s
formerly freewheeling press may now be subject to growing self-censorship under the watchful eye of Beijing.

“We, the undersigned seven news industry associations and trade unions are deeply shocked by the sudden sacking … of a moderate and professional journalist,” the statement said.

“The grounds given, that the newspaper is operating in a difficult economic environment, seem far-fetched to us,” said the statement, which was signed by the Hong Kong Journalist Association (HKJA), the Independent Commentators Association, the Hong Kong Press Photographer Association, Journalism Educators for Press Freedom, the RTHK Programme Staff Union, the Next Media Trade Union and the International Federation of Journalists.

“We are deeply worried and disturbed by the implications this has for press freedom in Hong Kong,” it said.

“We can only guess that some of Keung Kwok-yuen’s views and methods weren’t shared by senior management at the paper,” Shum said. “The managers of media organizations are increasingly using the unfavorable business environment and executive decisions to get rid of people they think won’t play ball.”

“[They are targeting] the so-called dissidents; the people who have different ideas from them, and who are heading in a different direction.”

The Ming Pao said in a statement it is operating in a difficult market, however.

“The company has to be pro-active about cutting costs. There was no alternative but to cut staff, including senior business and editorial staff,” it said, adding: “The editorial policy of the Ming Pao remains unchanged.”

Calls to Keung’s cell phone rang unanswered on Wednesday, and a Ming Pao public relations employee said he had already left the building.

The Ming Pao staff association said it was “extremely angry” about the decision by the paper’s chief editor Chong Tien Siong.

“We don’t accept the company’s explanation … we suspect that this goes way beyond cost-cutting measures,” Phyllis Tsang, spokeswoman for the association, told RFA.

“We think they are using cost-cutting as an excuse to target staff who have different opinions.”

Under the terms of the 1997 handover to Chinese rule, Hong Kong was promised the continuation of its existing freedoms, including freedom of speech and association and a separate judicial system and immigration controls.

But officials in the city’s government have recently warned that there are “limits” to freedom of expression after newly-emerging political groups said they would pursue independence or self-determination for the city.

The HKJA’s annual survey last month showed that press freedom as perceived by both media professionals and the general public in Hong Kong has declined for a second year running.

The Hong Kong Press Freedom Index for journalists, which measures how professionals feel about journalism in the former British colony, fell by 0.7 points, while measurements of public perceptions of press freedom fell by 1.4 points, the survey said.

Fifty-four percent of Hong Kong residents believed that press freedom worsened in 2015, while just 34 percent believed there had been no change, it said.

Reported by Lam Kwok-lap for RFA’s Cantonese Service, and by Xin Lin for the Mandarin Service. Translated and written in English by Luisetta Mudie.